Well, I think the Golf Channel is getting a bit desperate for new “stars” on its team. Last night I was watching the Grey Goose 19th Hole and Steve Sands was hosting it. Now, I like Steve Sands and although he doesn’t have the same “charm” as Vince Chillini or spunk of Kelly Tillman, he’s not too bad. BTW…where is Vince these days? I missed him on the Big Break Mesquite. Speaking of which…I’m really miffed that Hiroshi is gone – my hottie was just not hot enough this week – how sad…I was sure he was going to win. I expect Brian will take it all now – I didn’t like him much – too nasty (or was that just the GC producers playing with his words….)

Anyway…back to the Golf Channel commentators/experts/analysts… 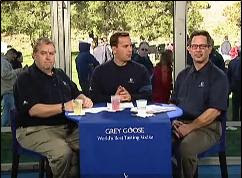 The Grey Goose 19th Hole’s new “team” of Mark Cannizzaro of the New York Post and John Hawkins of Golf World magazine were…how can I say this nicely – “They should stick to print and stay off TV”.

Sorry, they may be good writers and they may know their stuff, but when it comes to TV, you need a “presence” and these two guys have none – nada… the camera is not kind to them. And they tried waaaay too hard to be funny and witty and failed miserably. I turned off the show – it was just too pathetic for words.

Actually, this isn’t the first time I’ve seen this attempt to spice things up on the Golf Channel fail. But they haven’t learned. Take the show The Approach with those two so called “experts”, Andrew McGee and Alex Miceli. I can’t stand them bickering and arguing like children. 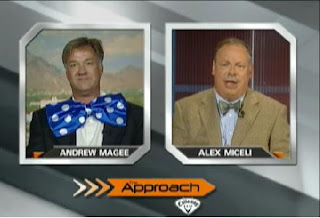 I refuse to watch that show (which is hard for me, given what a golf addict I am.)

Anyway…maybe when silly season is over, we’ll get some better personalities back on the Golf Channel. Right now, they’re scraping the bottom of the barrel in my mind!