Weekend golf musings…Where was Nedbank?, “Why am I here?”,You’re never too old for golf

I don’t know about you, but I could not watch the Nedbank Golf Challenge this weekend and I’m peeved. What a great line up of golf stars and I missed them! Take a look at this leaderboard… 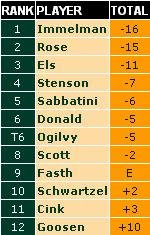 I realize that some top names were missing like Tiger, Phil, Padraig and Jim, but hey…these players are still some of the best in the world and instead of broadcasting this, The Golf Channel showed the New Zealand Open. Now, don’t get me wrong… I did enjoy the NZ Open and really enjoyed watching Sir Bob Charles either shoot his age (71) or beat his age (68). That was so cool. Did you know that Sir Charles became the oldest man, at 71, to make the cut on a major non-seniors tour? Watching him play made me believe in golf as a life long game and confirmed what I always believer – you need to stay in shape to play this game well over a long period of time (John Daly…take note). I know there are folks who say you can play golf without being in shape, but that is just a temporary blessing that won’t last long if you don’t take care of yourself…but I digress…

So where was the Nedbank? On PPV and Direct TV. That’s sucks. I can’t get Direct TV in Canada (another rant for another time). As you know, Trevor Immelman is one of my faves and so are many of the others in the field. It must have been great to watch the final round with Justin Rose and Tevor playing head to head. To think that Trevor only made it into the tournament because Sergio Garcia pulled out says something about kismet. I wonder if Sergio is going to ask for a percentage of the purse. haha

As for Q-school, what a painful thing to watch (especially today in the final round when one putt meant card or no card – job or no job – scary). But the thought that kept going through my head all weekend was…”Why are you here?” Sure, I understand those trying to come up from the Nationwide or enter from college, but when I see people like Frank Lickliter, Bob May, Duffy Waldorf and Carlos Franco back in Q-school, I can’t help but wonder…Did they just slack off on the PGA? How does someone (i.e. Bob May) go from a playoff with Tiger Woods at the PGA Championship in 2000 to missing out in Q-school only 7 years later? I thought the same thing last year when I saw Lee Jansen in the field. What happens to these guys? They proved they had it…and then they just seem to lose it. Do they get lazy and stop working hard (or like Franco confessed…he doesn’t really practice at all)? I’m still scratching my head over this…

But the icing on the cake this weekend for me was seeing two big breakers make it into the PGA and LPGA tours. Congratulations Tommy “two gloves” Gainey and Becky Lucidi! It was wonderful to see them work so hard to achieve their dream.

You know…it’s great to watch the big names play, but I have to say, watching someone play for their job, their dream and their families is really something special.

One final note…Steven Bowditch…great to see him finish so well in New Zealand and I applaud is courage to admit to depression and his work with Beyond Blue…but Steven…time for some tweasers or hot wax… those eyebrows need some serious work! A DOUBLE-BOGEY at the final hole cost Justin Rose victory in the Nedbank Golf Challenge here yesterday. South African Trevor Immelman was the winner by one stroke after a pressurepacked final round. “It just shows what nerves can do,” said Immelman,…read more… RICHARD Finch made some amends for Europe’s poor representation when he won the New Zealand Open by three strokes from Australians Steve Bowditch and Paul Sheehan yesterday. But the Englishman, ranked No. 523 in the world and enjoying his first pro…read more…

Tech Tags: The Cairns Post newspaper SPORT
Pamper yourself on Maui! Book your little piece of heaven in golfers’ paradise. Book now at http://www.vrbo.com/424659 and tell them Golfgal sent you!