Well, it’s finally here – the first tournament of the season! The 2008 LPGA tour starts this week in Sun City, South Africa with the Women’s World Cup of Golf. And for me, what’s even more exciting is the fact that it’s a team event. I love team golf events! Here’s a look at the teams… 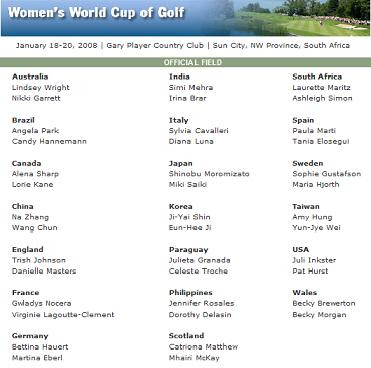 The Women’s World Cup of Golf is a 54-hole tournament with twosomes from 20 countries competing in a different format each day: foursomes, four-ball and stroke play.

My favourite is always the foursomes (AKA “alternate shot”). I love it when a golfer is “stuck” with whatever her partner did before.

It looks to be the most challenging for the players, especially if they don’t play the same type of game or even the same type of ball. And what high handicapper doesn’t love to watch a professional golfer sweat a bit.

This just in…
According the The Washington Post, three countries share the lead at women’s World Cup of Golf today (France, South Korea and Canada are tied for the lead midway through the opening day). Yeah Canada – You go girls!

The defending champions, Julieta Granada and Celeste Troche from Paraguay are not likely to draw too much attention this year unless Julieta shows the promise she had in 2006 when she won the ADT Championship and became Rookie of the Year. 2007 was not a good year for either player, and I doubt they’ll even make the top 10 at this year’s event. Sorry ladies.

The two teams that will most likely battle it out for the win will be Swedish Solheim Cup veterans Sophie Gustafson and Maria Hjorth (who will be trying to redeem Sweden from its 18th place finish last year), and Juli Inkster and Pat Hurst from the US, who placed 2nd last year after a strong showing in the foursomes.

But that’s the great thing about golf – you just don’t know what will happen.

I’m very happy to see The Golf Channel is going to broadcast it. I wish they would step up and broadcast every LPGA tournament that network TV won’t cover. Unfortunately, they don’t seem to want to do that (e.g. Fields Open is not being broadcast from Hawaii in February). I don’t understand why, but it’s sad to miss an LPGA event while The Golf Channel televises yet another boring infomercial. But that’s a whole other posting…

Play well ladies! And remember…never say “sorry” after a shot, hole or round. It’s the unwritten rule of team play…