Surprises this week – Tiger is “fun” and “bigger is not better”

Well, I’ve been a bit out of touch the past couple of weeks and couldn’t post anything, but I did try and keep up to date on what’s new in golf. And of course, on the surface, it appeared that not much was new – Tiger won again – Ernie crashed at the end…ho hum…seemed to be more of the “same old same old”…

But then I ran across this Irish newspaper…

What a pleasant surprise to see someone say how nice Tiger is. What we tend to hear over and over is “Don’t piss off Tiger or you’ll regret it”. Rarely do we hear what a really nice person Tiger can be (except from maybe Mark O’Meara or Charles Howell III who are good buddies of his). I’ve never heard anyone who didn’t really know him well say something truly kind about him as a person – most are too intimidated by his game and focus.

But last weekend, a virtual unknown in golf, Damien McGrane, who got to play with Tiger said, “He is very encouraging and supportive on the course. He is a good guy. Unless you play golf with him you probably wouldn’t realise what a good guy he is.” I thought Tiger was too focused on his own game to ever encourage another players – especially one who wasn’t his friend yet.

And then Tiger, graciously shared his compassion for Damien when he struggled on the 18th, “I feel bad for him with what happened on the last hole. He fought all day and was grinding. You saw how hard he fought yesterday and to make that mistake at 18 was a shame.”

How nice was all that! Made me smile, given all the crap we usually have to listen to. 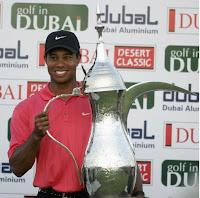 Another surprise last weekend was the Dubai trophy. Excuse me….you call that a trophy!? What mantle exists in the world that can hold that monstrosity? I laughed out loud when I saw it and it appeared that Tiger was chuckling himself trying to hold on to it. I guess the folks in Dubai haven’t figured out yet that size doesn’t matter in golf (and if it did, less would be more, as it is with the score).

Graeme McDowell and Damien McGrane had to bow to the superiority of Tiger Woods in the final round of the Dubai Desert Classic. After outscoring Woods by a stroke (72-73) in Saturday’s third round, McGrane paid the price for that energy-sapping… read more…

Related:
Unknown has his day in the sun with Tiger
Tech Tags: Monday – Sport newspaper Sports News
Pamper yourself on Maui! Book your little piece of heaven in golfers’ paradise. Book now at http://www.vrbo.com/424659 and tell them Golfgal sent you!