Britney Spears meet John Daly – You two were made for each other! 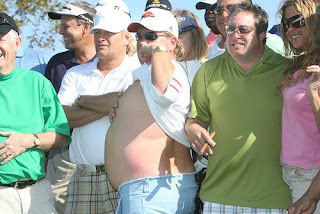 Guess who’s scheduled to play at the Zurich Classic in New Orleands this week?

Surprised? Yeah…so was I…Who would even think to offer him a sponsor’s exemption right now?

And, get a load of this…”Wild Thing” is also scheduled to appear at the Shell Houston Open the week after, and also at the Verizon Heritage in Hilton Head, the week after the Masters.

You’re wondering about my need to rephrase? Well, JD isn’t exactly “Mr. Dependable” when it comes to showing up for work these days. He’s only “scheduled” to play at these events…who knows if he’ll show up.

He was DQ at the Arnold Palmer Invitational (I know I know…he had an excuse, but it’s funny no one else missed their tee times that day). Then Daly withdrew from last week’s PGA Tour event in Puerto Rico citing stress.

Stress…right… You have no one to blame but yourself Big Boy! The world is your oyster, John, and you’re shucking it!

Sorry golf fans, but JD is no longer someone I feel sorry for. He’s a big boy (in more ways than one) with 4 kids and he has got to start taking some responsibility for his life and his failings. What gets me isn’t John’s problem with drinking and being a good ole boy off the course, it’s his attitude.

“I don’t need a coach,” said Daly. “I need a woman in my life.” Puleeeeze John…you don’t need a wife, you need a mother!

You’re like a big kid who needs some “tough love” discipline. I feel like you’re becoming the Britney Spears of golf. What if you go so far that the courts take your 4 beautiful kids away from you? Will you grow up then?

You haven’t finished in the top-10 on the PGA Tour since 2005 and have only made 3 cuts in 7 tournaments this year. You get new clubs and so all’s well with the world now? “Tuesday was the best day of my life. I got MacGregor clubs that Greg Norman made. I’m hitting the ball great. I’m close now. New Orleans is going to be a great week.” Talk about denial!

According to the Orlando Sentinel, John’s tired of ‘all the negative s***’, and hopes that the next reporter who writes about him will “write happy, write something positive“

Okay John…I’m ready….Give me something positive to say and I’ll shout it from the Internet rooftops!

My fingers are poised on the keyboard John…but they’re starting to cramp up.