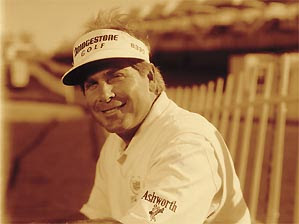 Freddie Couples – glides instead of walks – doesn’t like the limelight that comes with fame – not crazy about being surrounded by fans – known for quotable quotes you have to read twice to understand – shy but fun – self proclaimed as lackadaisical, bad luck with the ladies…

I’ve heard all these things about Boom Boom, but the thing I’ve heard the most is that Freddie Couples is the answer you hear most often when asked, “If you could play with a PGA player for 1 round, who would it be?”

I’ve always liked Freddie because he looks yummy and he plays great. He’s laid back and did I mention, he’s oh sooo cute 🙂 If Freddie were younger, I’d put him the same “eye candy” category as Paul Casey and Adam Scott. They make women who DON’T love golf, sit down and watch it on a Sunday afternoon.

I read a really great story obout Fred Couples in March 2008’s Golf Digest. It was honest and heartwarming in many ways. And it really made you feel like you knew the real Fred Couples. That didn’t happen for me with the Tiger story published earlier this year. Everything about Tiger feels “screened” – never giving away too much. The story and interview with Freddie was refreshing. And I like him even better than I did a week ago.

I wasn’t golfing back when Freddie was in his prime, but I did watch him on TV. And I do remember thinking how his life must be oh sooo good…..such a good looking guy with such talent. Life for him must be a bowl of cheeries. Note to Golfgal…Appearances are usually deceiving. Freddie has had his share of struggles. Read the article. And if you can’t remember what he was like back in his hay day, then check out this tribute to Freddie.

I love him in that sandtrap at the British Open – “Hello down there!”

Anyway, Freddie’s back in the limelight again with his 65 at the opening round at Bay Hill. I hope his back stays healthy through the 72 holes and we see him paired with Tiger on Sunday. Wouldn’t that be great! 65 is his lowest round since the 2006 Northern Trust. Freddie hasn’t qualified for THE PLAYERS yet, but a win this week would ensure his spot at TPC Sawgrass.

Anyway, in honor of Freddie, I decided to watch the Robin Williams HBO Special last night. That Scottish golf skit always makes me LOL! Wouldn’t it be great to have him as Freddie’s assistant on the President Cup’s team? ORLANDO, Fla. — It was like a giant hand reached up and turned back the clock for former champ Fred Couples who fired a five-under 65 to seize a share of the first-round lead at the Bay Hill course Thursday. The 48-year-old American shares the lead at… read more…