The LPGA should rename itself “The LorAnnika Tour” 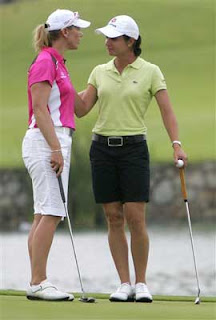 The see-saw winning ways of Lorena/Annika… I just love it don’t you? It’s way better than the Tiger/Phil battle in my opinion. It’s seems more civilized in some ways – less bitchy, which is ironic.

I didn’t get to watch the event as we don’t get ESPN 2 on cable up in the Canadian tundra (grrr), but I saw some highlights on TGC. I was rather shocked at Lorena’s temper – did you see her wack her club in the rough about 5 times – might have been the 9th hole where she had a bogie. Yikes! I thought she was such a calm and collected kind of girl 🙂

I heard on The Golf Channel that Lorena was told that Tiger takes out his anger in about 10 seconds and leaves it behind. Her response, “I take a little longer than that.” haha…no worries Lorena. I bet your language is a lot tamer 🙂

I thought this writer below was funny, saying Lorena was struggling with her game lately with a fifth and T12 in the last two events. I wish I struggled like that 😉

Ochoa, who lead going into Sunday had Pressel and Matthew hot on her heals, “I think there were like five or six players just right there at 8- and 9-under, so it was a difficult situation. I love the feeling of adrenaline and just trying to be good and be smart and win at the end.”

As much as I love seeing Lorena wipe out the field, it’s more fun to watch a tight race. I was really happy to see Morgan shoot a 66 – she’s got so much game, it’s a shame she hasn’t done better this year. Hopefully this final round will spur her on for the rest of the year and she’s come out on top soon.

Annika started so well, but ended tied for 11th. Not too shabby, but I’m sure she was disappointed with her 71. Christina Kim was in fine form, which I love to see. I really missed her at the Solheim Cup last year. I hope she plays her way onto the 2009 team. She deserves to be there. 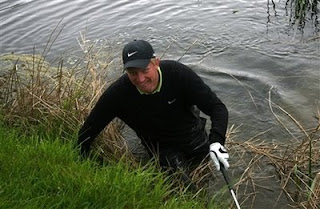 Oh, before I forget, a big congratulations and a towel go out to Richard Finch for making a big splash at the Irish Open. Who does he think he is…Aqua Man?
“I had considered chipping out backwards before going for the green with my fourth but, when I rehearsed a stance and realised that I had one, I decided to go for it,” he said.
I wonder if it had been the 15th hole if he would have taken the same risk.
Haha…the things we do for this game…
BTW…I had a wonderful opportunity to interview Brittany Lincicome last week for my post on GFW today. What a wonderful young lady she is – a sweetheart with a driving average of over 270 yards!!! And they say women can’t play with the men – hmmm…how many of you golfguys hit 270 yards off the tee on average and hit the short grass – I didn’t think so… 🙂
Golfgal

World No. 1 Lorena Ochoa of Mexico won her sixth title of the year here Sunday, firing a one-under par 71 to capture the LPGA Sybase Classic for the third year in a row. Two weeks after her four-event LPGA win streak was snapped, Ochoa captured the…read more…

Tech Tags: Edmonton Journal newspaper GOLF MONDAY
Pamper yourself on Maui! Book your little piece of heaven in golfers’ paradise. Book now at http://www.vrbo.com/424659 and tell them Golfgal sent you!