Michelle Wie and US Open…”I think I can win.” 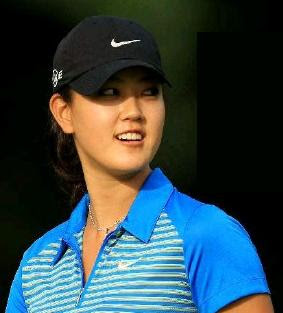 But come on people! This is not Munich – this is not a qualifying round – this is the big leagues and Michelle is in no way ready to contend in this year’s US Open.

Some people may think I’m not a Michelle Wie fan and that couldn’t be farther from the truth. I believe this girl has more talent in her pinky than many players on the LPGA, but she’s just not ready for prime time.

Michelle needs to pay/play her dues and she needs to take baby steps to stardom. I don’t know where the pressure lies (she says it’s herself, but few of us believe that), but it’s time for Michelle to face the truth, play golf, finish school and keep silent. Let her clubs do the talking and eventually they’ll sing a new song for her.

It’s Friday morning and Michelle is lying 77th in the field at +7 after 12 holes – 13 strokes behind the leader who’s also just finished her 12th.

It’s time for Michelle to grow up and face reality. Confidence is great and it can turn a contender into a winner, but unrealistic expectations can kill a career.

EDINA, Minn., June 25 — As Michelle Wie prepared to play her final early-morning practice round for Thursday’s start of the U.S. Women’s Open, first-tee announcer Mary Mayer decided to have a little fun with her introduction of the Stanford University…read more…

her 16th birthday. As a high school junior in 2006, she had top five finishes in three of the majors, missing out in a playoff by a shot at the Kraft Nabisco. She also was attracting attention from big-time sponsors, including Nike and Sony, and…read more…
Tech Tags: The Washington Post newspaper Golf Scoreboard On The Next Tee
Tech Tags: The Washington Post newspaper Wie Wobbles U.s. Women’s Open Sports
Pamper yourself on Maui! Book your little piece of heaven in golfers’ paradise. Book now at http://www.vrbo.com/424659 and tell them Golfgal sent you!