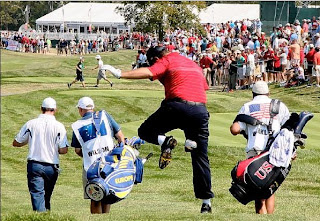 Everyone can’t stop talking about the Ryder Cup and how the US skunked the Euros. It was quite the spectacle.

When I thought about writing this post, I looked around at what others were saying and thought, there’s not much more one can say, really – the US played better. For once, in a long time, the European team just wasn’t “on form”, except of course, the one person who I thought shouldn’t be there – Ian Poulter.
Now, I still think Faldo picked the wrong person this year. Ian is a great player and he played great, but I think Darren Clarke would also have played just as well and he would have spurred on his team mates more. Maybe with Clarke there, Harrington, Garcia and especially Westwood, would have been “on form” too.

But, that’s something we’ll never know. So time to drop that topic – no point in kicking a dead horse.

Anyway, not much new in the North American media today – we heard it all yesterday. But today, Faldo’s boys had to head home, so I decided to check out my favorite UK writers again to see what they have to say. Once again, they didn’t disappoint…

Neil Squires of Daily Express had some choice words worth sharing…”When the dust settles and the inquest begins, it will be possible to call into question both men’s judgment but neither’s wholehearted commitment to the cause. Azinger…wanted the scalp of a six-time Major champion. Faldo’s journey was more about satisfying his own ego. When he chose to introduce his family one by one at a bizarre opening ceremony speech he mentioned that it was great to have the younger members at Valhalla because they would not have been able to remember his playing days. This has been his return to the centre stage all great players one day have to leave.”

Yup, it’s all about Faldo.

What killed me in this article, however, was the reporter’s comment, “This was street-fighting not statesmanship. The men who follow in 2010 will do things differently, certainly in Europe’s case where the leading captaincy candidates for Celtic Manor are a lot less egocentric than Faldo.”

Well, I do agree about the egocentric part, but to say the Welshmen won’t be rabble-rousers at the next Ryder Cup is like suggesting that Boo Weekley be on the next cover of GQ magazine – just plain silly.

Anyway, after enjoying Mr. Squires’ version of the weekend, I had to read Paul Hayward of Daily Mail. He’s quite the writer – lots of metaphors and colorful commentary. I just love this guy. Look how he starts this article…

“America’s response to the threat of losing a fourth consecutive Ryder Cup was reminiscent of Charlton Heston holding a musket over his head at a National Rifle Association conference and warning anyone who might be tempted to take it off him: ‘ From my cold, dead hands.’”

Now that’s a picture! Here’s another one..

When Boo holed from a bunker to go two-up on Wilson, “Azinger was off his buggy, pumping his fists and generally acting like an especially excited gameshow host.”

“By mid-afternoon, the 37th Ryder Cup was having the brain-mashing effect of a Louisville Slugger being banged against a bass drum.”

“We in Europe can’t accuse the Americans of not caring and then empty a tripe bucket on their heads just because Kim high-fives incessantly and Weekley flapped his arms so much at the crowd he was in danger of taking off.”

Boo Weekley – I can’t stand the tobacco chewing and spitting, but that Dukes of Hazzard boy can play golf. I love what he said when asked how he was feeling, “In terms of adrenaline I feel like a dog that someone done stuck a needle into and it juiced me up like I’ve been running around a greyhound track chasing one of them bunnies.”

Maybe Boo should be writing his own news articles – he just might give Paul a run for his money at the Daily Mail.

But then again, Graeme McDowell isn’t too bad at painting a picture either. After he placed 2nd only to Poulter on the European Score Card, he said, “This was an unforgettable experience. I don’t think I’ve ever had as much fun with my clothes on.”

Now that’s a picture I can live with – finally something pleasant to take away the vision of the backside of Boo horsing around. AM E R I C A ’ S response to the threat of losing a fourth consecutive Ryder Cup was reminiscent of Charlton Heston holding a musket over his head at a National Rifle Association conference and warning anyone who might be tempted to take it off him: ‘…read more… THE last scenes of the utterly compelling drama that has been the 37th Ryder Cup were played out against a backdrop of red – final testament to the unprecedented influence the captains have had on this contest. The American fans listened to the pleas…read more…