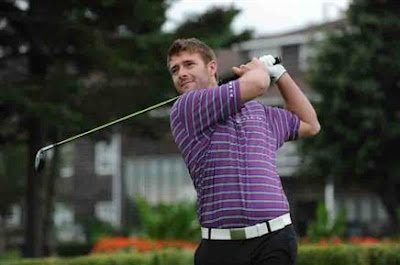 Hard work, mind you, and definitely work that required years of training and practice, but still…that’s a lot of do re me! And in US $ too!

It almost feels like a first place purse at a PGA Tournament – NOT! Need at least 1 more zero to come close to that. 🙂

But something tells me that Derek is going to hit the big leagues very soon. This is just a taste of what is to come. He’s got game, he’s got guts and now he’s got the gold!

It seems like only yesterday that I talked to Derek before Big Break PEI even aired, for a “20 questions” interview for Inside Golf Magazine. Being the only Canadian, I thought it would be cool to let Canadian IG readers know about the only Canuck in the mix. Little did I know that he would go home the champion. I’ll say it again…Well done Derek!

Last week after watching Blair play the first 9, I started to believe it was anyone’s championship. And then after Blair’s amazing birdie on the 10th hole, I think more than a few people were wondering if it was time for the underdog to win. But as Blair said…she played her best, but it wasn’t quite good enough. Derek played better. Derek deserved to win.

But Blair never gave up – her putt on 12 showed that. As Stina said, Blair had nerves of steel after 3 putting the previous green. It was so great to see her battle to the very end. Her composure was amazing.

Before we get into the interviews this week, I want to share with you my three part series on Rodd Mill River, home of Big Break PEI. I had such a wonderful time playing there and after seeing the contestants play the 18 holes over two weeks, I felt like I had walked the fairways with them. I hope you enjoy them and give PEI and its 30 golf courses a try for yourselves. It is a golfer’s playground…

I started tonight with Michael Michaelides from Big Break X. He had some very interesting comments about playing it safe versus playing it smart when I asked him about Blair’s remarks on 15…

Next up was Brian. He gave me some insights into that day and the players, but mostly he left me with a better understand of what it means to be a big breaker, what he learned from the experience, what he would do differently if given the chance again, and how much he cares for the people he came to know over the 2 weeks.

Brian may have appeared to be “The Villian”, but he is actually a big softie with a big heart. I hope he does well in his chosen career as a pro golfer. His website BrianSkatellgolf.com should be live soon – be sure to check back for that.

Well, the man of the hour had a busy night being on a live chat session with the Golf Channel. They said it was supposed to be half an hour, but it’s almost 2 hrs later and Derek’s still there answering questions. That’s impressive. But what really impressed me was that he still made time for our weekly interview. Money hasn’t gone to this champ’s head…

Wow, pretty cool about the Nationwide event and that sponsor exemption from Mr. 99 himself. Very very cool!

Caught up with Blair today – my what a busy woman she is! She may not have won the $100K, but something tells me Blair is about to find her own big break as a result of her strong performance on the show…

I hope Blair enjoys her week at the 5 star Rodd Crowbush Golf and Beach Resort. With all the events and travel she’s been doing, I bet she’ll need the rest and that’s a great place to relax and enjoy 5 star pampering. I just finished up my article on that golf course/resort and will publish it later in July. The Links at Crowbush is a “must try” experience – it looks like it was plucked straight out of Ireland.

Well, it’s time to say goodbye. I want to thank all the contestants who took the time to chat each week with me. What a great bunch of people! I can’t wait to do it again for Big Break 12. I think it’s time for another reunion don’t you?

In closing, a big congratulations goes out again to Derek! And Brian shared in his interview, “The right person won.”