I can’t believe it’s been a week since the Olympic Flame was handed off right in front of my house on its amazing journey across Canada. 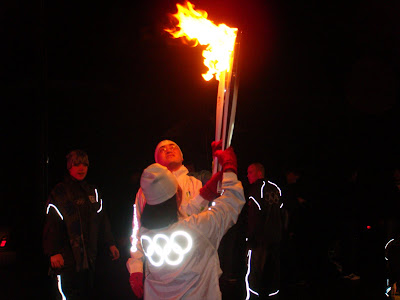 It seems like just yesterday that I was drinking champagne with friends, running outside to see the torch pass, jumping up and down cheering on the runners and feeling like a part of history. 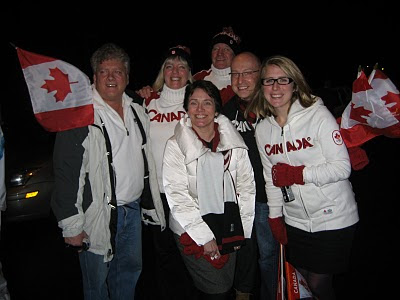 I have to admit this has been far beyond what I ever imagined. I love having the Olympics in Vancouver!!!

Now… I was always in favour of the games coming to Vancouver, but it was for everyone else, not me. I thought it would be fun for winter sports lovers and I could really see the economic benefits for the city. But because I thought it would be a zoo, I planned on escaping south for two weeks to golf instead.

But life interfered with my best laid plans and I ended up staying in town. I can’t tell you how happy I am that I’m here right in the middle of managed chaos. It’s fun, friendly, energizing…magical! How could I ever thought of leaving all of this! 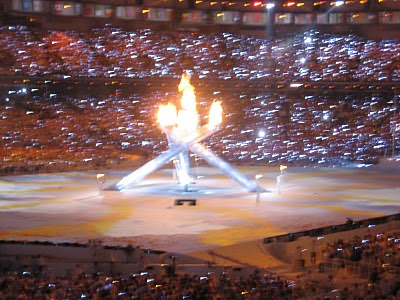 We’re almost half way through the Winter Olympics and I couldn’t be more excited. Okay…I could be more excited, but only if I was watching Olympic Golf. I can’t believe it will be 6 more years before we get to see the world hit Rio with all the fan fare that arrives with the Olympic Games.

I was thinking yesterday how much I would love to be in Rio to see Canada compete in its first Golf Olympics since the early 1900’s. It made me feel a little sad and then I heard this song on the radio – a song that spoke about patriotism, passion for a sport that spells CANADA and a game that I had not paid any attention to for over 20 years…Hockey! Listen…

Isn’t that just the best! I love this song. In fact, I can’t get it out of my head. I love the lyrics and the tune. I love it so much, I want to go see a hockey game!!! 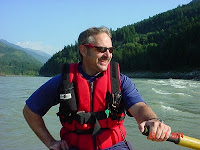 But hockey tickets aren’t that easy to come by in the great white north, so I figured, the next best thing to being at a game is to talk to the man who created the perfect theme for our Canadian Hockey Team — the songwriter himself, Bryan Fogelman, founder of Blue Crush Music.

Here’s what he said…

“I started writing the song over a year ago and I wanted to write something about Canada; I had no expectations that Crosby, Staals and Nash would be chosen for the Olympic Team. But I went ahead and recorded and produced it last fall, and then in early January they announced the roster and it was fabulous – all three players made the team. “

Now what would motivate someone to write a song about 3 players before the team was even chosen?

“Basically it’s all about patriotism – the love of Canada and the love of hockey. I wanted to get people fired up and unified, and that’s exactly what’s happening with the Olympics.”

Okay, so how did you get a song like this on major radio stations so quickly?

“As an independent artist it’s very hard to get songs on the radio. Stations are programmed and so tightly controlled, the record labels have the ‘in track’ and it’s very hard to get it in. But because of the Olympics, the song’s been given a chance. And it’s unbelievable what’s going on right now.”

I couldn’t agree more Bryan! I love the song and after hearing it just once, I suddenly MUST SEE an Olympic hockey game! Psst…anyone have tickets?? 😉

I closed off my conversation with Bryan with a request that he write a song about golf. His answer?

“I do have a song about Tiger coming up, but I can’t reveal it right now.”

Hmmm…wonder what that’s about. Haha! I can only imagine. But I guarantee you this…the moment it’s produced, I’ll have it right here!!!

Now…about those tickets…I paid a fortune to see figure skating. Now, I’m broke. So…Anyone have extra cheap/free tickets to a Canada hockey game? I’m very flexible – either Canada/Russia or Canada/USA will do 😉

After all…Bryan said it best, “The Great White North Boys Sure Kick Ass!!!”