This seems like “much to do about nothing” to me. Drug testing for athletes is common all over the world. If golfers want the game to be called a sport and themselves, athletes, then that comes with conditions (whether they are “needed” or not).

What’s the big deal? As long as they don’t start saying that an antihistamine is a banned drug, I have no problem with this (outside sports in allergy season need to make some concessions).

Anyway..I’d like to hear what you think. A good debate is also fun 🙂

ps: I wasn’t going to mention this, but did you see the LPGA is the first to announce it will bring in testing in 2008. Ladies first – AGAIN! 🙂 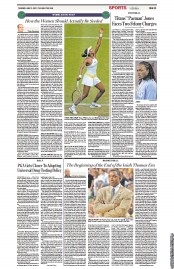 CROMWELL, Conn. — The PGA Tour is getting closer to a rule on performance- enhancing drugs, and with testing likely to follow, commissioner Tim Finchem says golf organizations around the world should make sure they’re on the same page. Even with Tiger… read more…