If you have nothing good to say….say nothing

Well, this story was certainly a surprise to me when I heard about it. I always liked Ames, but if this report is true, it sounds like he is a bit of a whiner. Funny how those who played well said the course was fine and those who played poorly didn’t like it. Sure, Furyk may be diplomatic about these things, but why be bitchy? If Ames has issues with the courses, he should talk to the folks who choose the courses for the Cdn Open in private, not publicly blast the hard working folks who are probably proud of their golf course. Enough said…

Now let’s talk about the weekend. It was great to see Natalie pull off the win at the Evian Masters. Maybe now she won’t have to do those pin up calendars anymore (NOW, who’s being bitchy, eh? :)). Sorry, I promise you I’m not a prude, but I am a golfer who wants to see the women play golf and show their talents on the course, not in bikinis. I guess we have a hard enough time being taken seriously in golf. She has so much talent – I hope she focuses on her game and stop playing around.

And Romero’s win? It was so great to see that long birdie at the end. I think that says a lot for his character and ability to stay focused until the very end.

Tom Watson – one of my all time favorites – the epitome of a gentleman and a wonderful champion golfer too. Funny how often those two characteristics go together. And Nick Faldo didn’t do too badly either given he plays so little. I do enjoy his commentary, but I hope to see more of him on the Champions Tour going forward.

Finally, Jim Furyk…yeah! I’m happy for no other reason than I don’t have to hear how many top tens he has this year without a win. I had the backhanded “complements” the media loves to spout off. It’s like they have to say something bad about everyone. There’s always a “but” in their mouths just ready to come out. Well done Jimmy!

As for Michelle Wie? Well…she’s still got some work to do…but it was nice to see her finish a tournament. 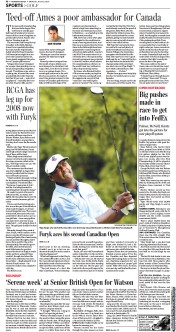 The mammoth Canadian flag that overlooks Angus Glen Golf Course was flying at half mast all weekend in remembrance of the course’s longtime superintendent, Ernie Amsler, who died on Tuesday at age 66. The reminder didn’t stop the top Canadian in the… read more…