Maybe not, but Tiger certainly should have been the “poster child” for this year’s PGA in the Tulsa airport. What’s Phil doing plastered on the walls?

Interesting that the non-controversial comment to that fiasco was “Somebody didn’t think. They just plastered Phil’s face on the wall.” No…someone thought long and hard about that – and that someone was Callaway Golf. They are a big sponsor of this year’s PGA and Phil is still their “main man”. In fact, it didn’t stop there. Phil was all over the golf channel last night – giving tips and doing analysis with the golf channel gang. Callaway is certainly getting their money’s worth from Phil. I hope he at least makes the cut.

BTW…what’s the most overused golf phrase in the world? It’s not…”In the hole!”…Nope…it’s “yet to win a major”. I am so sick of that phrase. Last night I finally changed channels to Iron Chef because I was sick of listening to the analysts go on and on and on about it. Alright, already! We get it!

Thanks goodness Lorena broke out of that…and Padraig too…the problem is that the media just replaces them with someone else. Sigh….somethings never change…

Anyway…I’m hoping once again for the gentle giant – the Big Easy – Ernie Els to win. How can you not love the guy! 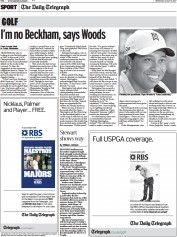 TIGER WOODS, who is looking to win his first major of 2007 at this week’s PGA Championship, has denied that he is the most influential athlete in the world at the moment. To him, the suggestion in the American magazines here is “funny” in the light of… read more…