I should have blogged this 2 weeks ago when I probably played with the most annoying golfer ever. I kid you not when I say that a very very nice man, who really could hit a ball, thought he was playing the PGA on every shot. I have never seen a pre-shot routine that took so long – on every shot. We’re not talking a minute – we’re talking mintues – many long, frustrating and “holding up those behind us” minutes.

He was completely oblivious to it even though his partner tried to joke with him and said more than once…”just hit the ball, Bud”. What really teed me off was that I let it affect my game. I rushed shots becuase I was trying to make up the time he wasted because I felt so bad for those lining up behind us. Charles and I ended up walking off the course at the 12th hole because we just couldn’t stand it any longer. As we walked back down the course, those behind us said, with a knowing grin…”A little slow up there????” We just rolled our eyes and said…”too slow for us” and kept moving. I think they knew it wasn’t our fault, but I felt so embarrassed anyway.

Pace of play is THE most important “rule” in the game of golf in my opinion. Women (at least the ones I play with) are extremely diligent about keeping pace because we are criticized (unfairly I may add) about our slow play. I have never seen a man pick up a ball after 8 shots or even 10. Women will do it all the time to keep the pace moving.

All chix all the time! 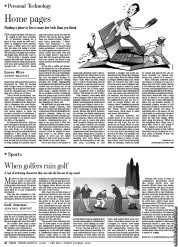 Maybe it’s just me, but this year I seem to have been paired with a lot more irritating golfers than usual. The worst was the nonstop chatterer I got stuck with in a local competition last month. This guy felt compelled to narrate every shot by… read more…