Adam Scott in Abu Dhabi versus George Lopez in Palm Springs – NO Contest!

I don’t know about you, but I almost had to turn the TV off yesterday watching the Bob Hope Chysler Classic. That wasn’t good golf – that was just silly. I am sorry…I do enjoy watching celebrities play golf in moderation, but I’ve had my fill of George Lopez and it’s only been 1 day.

And did you see the last 3 minutes on The Golf Channel where Rich Lerner and Nick Faldo tried “fill time”. That was pathetic. They were like two deer in the headlights – they had no idea what to say. You can say what you want about Kelly Tilghman, but she’s rarely a loss for words or quick quip to fill airspace.

No…for me…the winner, clubs down, this weekend is European Golf – The Abu Dhabi Golf Championship is on in the morning when I get up and there is nothing better than grabbing a cup of coffee and enjoying my fave two-some: Renton and Warren commentate about all the players. I just love it!

Just look at the lineup! It’s like watching the Ryder Cup “Q School” out there – all of the “best of the best” already vying for a few coveted spots. 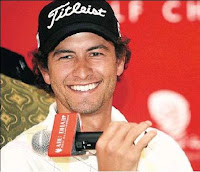 And talk about eye candy! My my…it’s a golfgal’s dream to watch the likes of Adam Scott (oh so yummy), Luke Donald (always color coordinated),

and one of the

best smiles on the course – Paul Casey, the defending champion.

And let’s not forget, the good “bad” boy, Ian Poulter. Is it just me, or is there strange resemblance to Rod Stewart going on here? 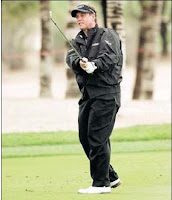 The oldies but goodies are also making headlines in the “love conquers all” category. Monty’s getting married this year and as happy as we’ve ever seen him.

And Darren Clarke has a new lady, Kerry Schiller (an American working in human resources for a London law firm) and a revitalized game. As he said last week after coming in 4th in Joburg, “I’m starting to smile again on the course. I’m desperate to get myself back up the rankings.” You go Darren!

Anyway, Nick Faldo has a big job ahead of him picking his Ryder Cup team. It’s going to be a very interesting and very exciting year. It will be tough getting out of bed to head to work on Thursdays and Friday mornings!