Pump it up Tiger!

Now how cute is this! I love pictures which are not too staged. Tiger’s genuine smile at his daughter is so warm and loving. 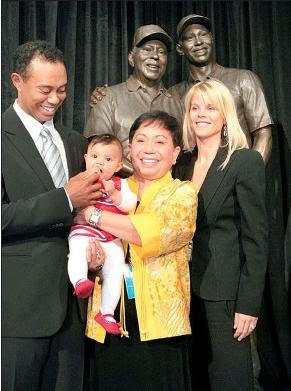 Hard to believe this is the same ruthless man that shows no mercy on the golf course. In fact, he showed no mercy at 11 years old to his dad when Tiger beat him for the first time and celebrated wtih his trademark – the fist pump.

‘‘I shot 71 and I went crazy,’’ Tiger said with that winning smile of his. ‘‘I punched the air, uppercutting the air and ran off the green. It was the greatest thing I had ever done in my life, beating my Dad.’’

I love the words etched beneath an eight-foot bronze statue of Woods and his father.

I challenge you to make a difference in the world to reach higher and farther that you ever imagined.

Inspiring kids is so important. It is amazing how many children do not live up to their potential because of a lack in confidence and self-esteem. If anyone can be a role model for those two characteristics in a person, it’s Tiger Woods. His “Fist Pump Challenge” sounds like a terrific program to build confidence in children. Celebrating successes and achievements, no matter where they happen, is so critical in child development.

On a final note…
I’m glad to see the lynching comment is being put to rest finally and that Tiger personally said something rather than just his manager. Now maybe people will leave it alone.

“It was unfortunate,’’ said Woods. ‘‘Kelly and I did speak and there was no ill-intent. She regrets saying it and, in my eyes, it’s all said and done.’’

I’m happy to see Kelly Tilghman back with Nick this weekend at the Buick Invitational. Sorry, but Rich Lerner is probably a really nice guy, but he was too boring for words for me. I had trouble watching the Bob Hope Chysler Classic, and it wasn’t just B-class-celebrity-overload, (Samuel Jackson excluded). Remember when presidents played that tournament? Those were the days…

Anyway…I am so excited to be able to attend Friday’s round this year. I’ve been to skins games with Nicklaus and Vijay and others, but never a PGA tournament with Tiger. I can’t wait! I’ll be sure to blog all about it, but don’t be surprised if I’m at a lose for words after watching him. 🙂 Anaheim, California — Twenty-one years ago, Tiger Woods beat his father Earl for the first time on a golf course and celebrated with the exuberant fist pump which has become his trademark. Prompted by that experience, Woods has announced the launch… read more…