Walking with Tiger at the Buick Invitational

Well, I guess I’m now an official PGA junkie. Yesterday, for the first time, I attended a PGA tournament (Buick Invitational) and it was not what I expected at all. Not to say it was bad – on the contrary, it was better than I hoped.

I was a bit worried when I showed up at Torrey Pines to discover that the tee times I had printed off the internet were wrong by about 2 hrs! So instead of watching Tiger hit his first drive off the tee, I watched his 10th. He played the north course backwards, so I was able to pick him up on his 10th hole (# 1) and stay with him the rest of the day.

I thought I might run around and watch others play, but it’s a very big property and not easy to move around too much – follow the path and ropes is about all you can do. But it was still great. I positioned myself so I could watch Vijay, Snedeker and Mahan play ahead of Tiger’s group (which included Jim Furyk and George McNeil). Normally I hate slow play, but today I actually enjoyed it because it gave me a chance to watch the group ahead. By the way, I wonder if Tiger called Jim before the game to see what he was wearing – they both looked very slick in their greys, but I wish Tiger wouldn’t put short sleeves under a vest – I hate that look! 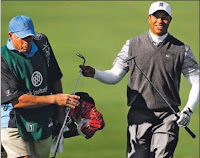 Tiger’s 10th hole was exciting for me, not only because it was the first time I ever saw him hit a ball live, but because I heard it and I felt it. He hit his drive to the right off the tee into some trees. If that had been my ball I would have chipped it out onto the fairway because threading the needle through the trees was not something I would ever contemplate – but I’m not Tiger.

The crowd gathered round pretty quickly and he just casually walked in amongst them to his ball. Everyone was quiet and respectful (surprise number 1 for me that day – how can 10,000 people be so quiet?). But boy, were they (we) ever close when he hit his second shot. But his demeanour was like he was alone – very cool to watch. He had to hit a shot very low, around and under a tree which had very low hanging branches. So I crouched down about 20 feet in front of him to watch the ball come off his club (he used a wood). I’m the “x” below.

The sound was unbelievable – like an F-18 blasting in front of my face. I swear I felt the wind change as it flew by me (I think maybe I was a bit too close for comfort :)). But it was an amazing sensation. The crowd around him roared. He drew it beautifully and just missed the green to the left. He chipped to within 5 feet of the hole and birdied it. And that was the start of a great afternoon of golf.

I wrote down every stroke, hit or miss he played all afternoon (got some funny looks from the folks around me, but I didn’t care). I also tracked Jim Furyk who I enjoy watching very much as well (his swing is even more bizarre in person than it is on TV). Poor George McNeil…he was often the last to hit, but no one wanted to stick around to watch him. The marshals had to keep people still just to let him hit before 10 thousand people took off to see Tiger hit his next shot.

Tiger birdied the first two holes of his back nine and then came a very short 136 yard par 3 which crossed a gorge and he missed the green short. It was a shock actually – a short little hole like that and the whole group could only par it. Hey…I can birdie a 136 yard par 3 – haha – Surprise number 2 – Tiger is human. Of course, he birdied the next hole with a great putt which I am sure was 10-15 feet from the cup.

His putting was great all day. His irons? – not so much. Surprise #3 for me. I swear he missed short on his irons quite a few times (I noted 2nd, 3rd, 5th, 7th and 8th holes came up shorter than I would have expected from him), but his chipping and putting saved him. Perhaps that’s why Lorena won best middle irons last year according to Johnny Miller.

Anyway, he shot a brilliant 65 and lead by 4 at the end of the day, behind the world famous Kevin Streelman (wink). Who is he? No one knows, but he was the last alternate to make the field from the Hooters Tour. I love what the reporter in the tribune said today…”I know guys who like Hooters. I know no one what has played golf for their hot wings.”

Mr. Streelman has made $21,000 on the PGA so far. He’s ranked somewhere up in the 1114 range. When Tiger was asked if he knew Kevin, he’d never heard of him. When asked if he knew his ranking, he cleverly said, “I think it might be going up.” Well, he certainly made headlines this AM – his name showed up more often in the San Diego paper than Mickelson (whose off season of no play played out poorly for him today which he honestly admitted. He has work to do…)

I wish Tiger no ill will this weekend at all, but wouldn’t it be a wonderful Cinderella story to have Streelman upset him? That is something I’d pay a lot more than the $25 I paid to watch Tiger play this weekend (surprise number 5 – how cheap is that!).

Bought myself a US open sweater and some logoed Pro V1’s as souveniers. The balls weren’t quite as expensive as the sweater, but close. 🙂

I’d be happy to share the play-by-play on each hole, but I’m sure the Golf Channel did a reasonable job, so I won’t bore you here. All I can say is I can’t wait for my next PGA experience. If I wasn’t a junkie before, I sure am now!

Now…what would happen if I actually attended an LPGA event? I can’t wait to find out! Tiger Woods made short work of the easier North course at Torrey Pines, leaving everyone else long odds of catching him at the Buick Invitational in San Diego. Woods chipped in for par, escaped from a couple of trees and wound up with a seven-under-par… read more…