I wrote a post on Golf For Women last week about Paula Creamer dreaming of being #1 in the world and looking to next year to make that possible. Many would scoff at such audacity, but I am cheering her on and am thrilled to see her capture her 5th LPGA title this weekend. 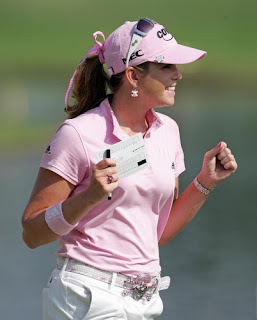 Even battling flu-like symptoms this week, The Pink Panther shot a winning 66 Saturday at the Fields Open in Kapolei, Hawaii, taking down Jeong Jang with her impressive 4 birdies in the last 5 holes.

I watched the final 6 holes of yesterday’s round and was impressed by Paula’s fight to the finish. She never gave up, even when she was 2 down in the final holes.

“We had to do it,” said Creamer.“I knew that coming down the stretch, just that pressure and knowing if you want to win this golf tournament you have to make this putt. That kind of took that momentum into 17 and made that one, and then into 18.”

I was suprised to hear Paula ask her caddie in a somewhat meek voice on the 18th, while staring at a 165 hard shot over water, “Do think 6?” She seemed so unsure of herself. Then she said, “I feel pumped up.” and promptly picked her 6 iron out of her bag. From there it was all confidence as she nailed her 2nd shot landing it within 5 feet from the hole.

What a great way to finish!

Annika Sorenstam ended in 4th place, 4 strokes back. She was impressive however. After a double bogey on 10, Annika rallied back with birdies on 11, 12 and 13. I love it when a player can put the past behind them and not let it ruin their game. That’s something I definitely need to practice! It certainly doesn’t come naturally.

Michelle Wie started off well this week and made the cut at 2-under, but Saturday was a huge struggle for her with a final round of 78. It’s too bad; she started the day on a roll with a birdie on the first hole, but then she had 4 bogey’s, a double bogey and a triple on the 18th.

Now, did you know that there’s a Wendy’s Champions Skins Game going on in Kaanapali? I had no idea and I consider myself quite “up” on what’s happening in golf. 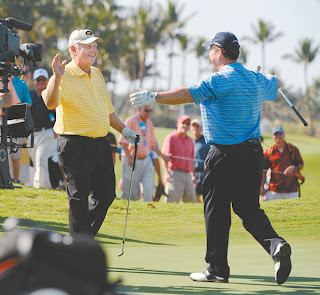 They’re up against 3 other 2-man teams made up of: Arnold Palmer & Jay Haas, Fuzzy Zoeller & Peter Jacobsen and Gary Player & Loren Roberts.

The last nine holes are being played today. I wish I could watch. Perhaps they’ll broadcast it on a less busy golf weekend. I love those guys! Tech Tags: The Straits Times newspaper Sports
Pamper yourself on Maui! Book your little piece of heaven in golfers’ paradise. Book now at http://www.vrbo.com/424659 and tell them Golfgal sent you!