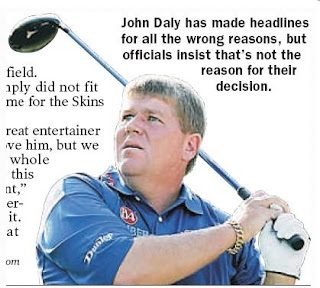 John Daly makes history in golf. He must be the first champion ever NOT to be asked to return to defend his title at an event. But anything can happen in golf and today, Daly, the 2-time defending champion of the Telus World Skins Game, will not been invited to be part of the five-man field in Vernon BC this summer.

I saw John play at the Skins Game at Nicklaus North with Jack, Stephen Ames and Vijay Singh. He was a sight to behold (smoking, laughing and yes, ripping it!). He was a crowd favorite.

Brad Pelletier, vice president and managing director of IMG Canada, which runs the event said, “What I can tell you is this — we have our five players locked up and John Daly is not one of them. We had spent considerable time looking at things and decided we wanted to change up the talent mix on it. Recent events this week had no bearing on it.”

Pelletier went on to say that Daly simply did not fit what he called a new “theme” for the Skins Game. Riiiight…what tournament in golf ever followed a “theme” besides winning? I may not be happy with JD’s behaviour of late, but defending champions should “defend”.

Let’s cut the crap Brad. You DON’T NOT invite a defending champion. Unless of course, you’re afraid. And as a fellow Canadian, if you are doing this because you are risk adverse and afraid, then I am embarrassed for you. You should be ashamed.

Pelletier said this year’s field for the June 16-17 event at Predator Ridge was finalized about a month ago. Do you believe that? I don’t. But I am glad to hear that Mike Weir will be in the field. I will probably attend the event as it is in ‘close to home’ territory, but Pelletier better not be within ear range of me. Troubled golfer John Daly won’t be gripping and ripping it — or chug-a-lugging cold ones, for that matter — at the Predator Ridge Resort in Vernon during this summer’s Telus World Skins Game. Daly, the two-time defending champion of the made-for-TV… read more…