Tiger’s Roar Louder Than Ever – Why?

Isn’t this a great shot? 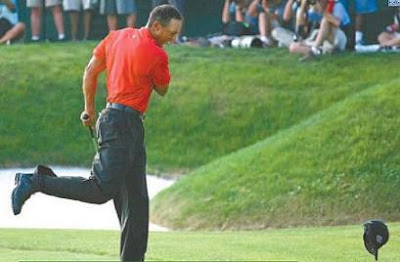 I don’t think I’ve ever seen Tiger Woods get so excited after winning a tournament. That putt (reminiscent of 2001 with Lefty) will be watched over and over, but not for the putt…for Tiger’s hat flinging dance of joy.

Why do you think he was sooooo expressive? Sure it is his 6th win in a row in 6 months. Sure it is Arnie’s tournament and he loves the King. Sure, he is now tied with Ben Hogan with 64 wins. Was it any of the above, or all of the above or something else entirely?

Watching him win the majors and hugging his dad with tears in his eyes was pretty standard for Tiger. We knew he was emotional, but this was very different. It was like he let his passion out for a while – something he carries with him all the time, but he usually keeps it in check, privately, except for his fist pumps. This time, as he danced backwards, with that stare on his face, he looked like he was about to explode… and explode he did.

I just loved it! He seemed so much more human to me than the machine that cranks out win after win after win. Remember the Fedex Cup? Ho hum…Tiger won…he wouldn’t even kiss the Cup. No…this one really meant something to him and I’d love to know exactly what it was that made it so special.

Perhaps we’ll never really know. Maybe he doesn’t really know himself. Certainly the interviews at the end of the day didn’t get the answer to that question from him.

But it really had to be something special for Tiger to take off his hat. According to Charles Barkley, Tiger doesn’t like taking off his hat because he’s losing his hair and he can’t pull of baldness like Chucky can. 🙂

Can you imagine what will happen when he wins the grand slam this year. What clothes will he remove then!?

Did you hear what Arnie said to him when he gave him a hug? It was tough to get it all, but what I heard was, “What else is new?” Haha… • Bart Bryant ORLANDO, Florida questions whether the average golf fan truly understands the magnitude of Tiger Woods’ dominance. Woods yesterday extended his six-month winning streak to six official tournaments — five on the PGA Tour and one on the… read more…