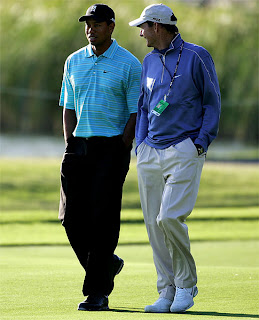 Below is a good article about Hank Haney and Tiger Woods. I really do recommend you read it. It made me like Haney a whole lot more…

Now…I have nothing against Butch Harmon, but he’s so “out there” and there is a lot of media around him and Phil and it’s almost a bit tabloid-ish to me.

Both are obviously excellent teachers, But, Hank Haney is different. Haney is unassuming and quietly confident which I really like. Harmon can shoot off at the mouth from time to time.

Anyway, I love the way Haney shared with the First Tee kids the meaning of not giving up and saying that he thinks Earl Woods is the greatest coach who ever lived. That’s quite a compliment.

As he said to the impressionable younsters about Tiger…“He never, ever, ever quits. Athletes say they don’t quit, but they don’t define quitting the same way that Earl Woods defined quitting. They might not quit in their mind, but Tiger really doesn’t quit.”

On the day Tiger turned 17, he struggled early in his round at the Orange Bowl International and began sulking on the course. Tiger’s father rarely raised his voice to his son (I think that was mom’s job ;)), but Earl made an exception after that round. He said to Tiger, “You can’t act like that on a golf course! Golf doesn’t owe you anything. This tournament doesn’t owe you anything. The only one who owes anything is you owe it to yourself to try your best every time you play.”

Apparently, Tiger didn’t say a word that day or the next. But after two days, he came up to his dad and said, ‘Pops, I heard every word you said. I promise you, I’ll never quit again.’

And he never has.

I guess this kind of sums up Tiger – you can always take him at his word (even when you may not always like what he says).

I am embarrassed to say that I not only have quit when the going got really tough, sometimes I didn’t even get started. Sigh…time for some self discipline I guess… For somebody who never made it on the PGA Tour, Hank Haney sure has his fingerprints all over golf history. Haney is the swing instructor and a trusted lieutenant of Tiger Woods. He is one of the few allowed inside the Sultan of Swoosh’s inner circle…. read more…

Tech Tags: The Houston Chronicle newspaper Golf Etc.
Pamper yourself on Maui! Book your little piece of heaven in golfers’ paradise. Book now at http://www.vrbo.com/424659 and tell them Golfgal sent you!