In second place…from Spain…the best golfer in the world who has yet to win a major….every reporter’s favorite punching bag — Sergio Garcia!

Now how’s that for a knock em down, beat em up kind of weekend! 🙂

With 6 out of the top 11 golfers missing the cut (notably: Steve Stricker, Geoff Ogilvy, KJ Choi, Vijay Singh, Justin Rose and Padraig Harrington), it’s hard not to give top honors to the course. 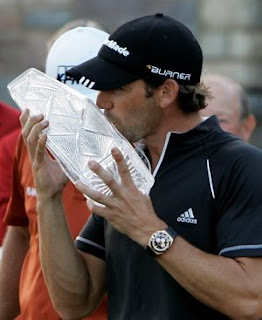 But Sergio tamed it as much as anyone could this weekend. And he really demonstrated the potential we’ve been waiting for since 1999.

I have to say that I really enjoyed watching Sergio stick it to them [reporters] at the Players. I loved it in the post round media conference when he was asked if he had silenced the critics and he responded with a smile and said something to the effect that, “Maybe I should ask you that question – I don’t write newspapers.” Good shot Sergio!

Sergio has always been the “straight man” to the media’s “quick on the draw” put-downs because he sets himself up so well with comments that he should think, but never say. But this weekend, it was almost like they were grovelling over him. I had to laugh.

When The Golf Channel brought Sergio over to the commentary desk, I noticed Brandel Chamblee wasn’t there – Mark Rolfing was there instead. Brandel was quite brutal with Sergio after last year’s British Open from what I recall and I was wondering if his removal from the desk for that interview was intentional. It would not surprise me in the least. Rolfing has always been a Sergio fan and maybe the only way TGC could get Sergio up there was to replace Chamblee with Rolfing for that interview. Maybe a coincidence? I wonder…

Oh well…I’m really happy for Sergio. He deserves this win and many many more. I wouldn’t be a bit surprised to see him win a Major this year. I don’t think it will be the US Open at Torrey Pines, but the British Open is a real possibility with his record there, regardless of what happened last year. He’s has 6 top tens in his last 7 tries at that event. It’s only a matter of time for him to close that one out

And I for one, think maybe this year, his time has come.

“THE challengers are not really challenging.” With these exasperated words on Saturday evening, one TV pundit set the tone for the weekend at The Players Championship. So it continued into yesterday’s fourth round at Sawgrass. Plenty of ‘oooohs’ and…read more…

Tech Tags: Irish Independent newspaper Sport
Pamper yourself on Maui! Book your little piece of heaven in golfers’ paradise. Book now at http://www.vrbo.com/424659 and tell them Golfgal sent you!