Can this Tony tame the Tiger? 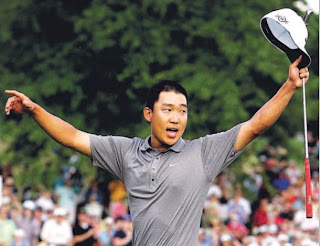 Many have lumped Anthony Kim in with the ranks of Rory Sabbitini and Jason Day as “upstarts” who should keep their mouths shut about being (or beating) the number one in the world. Even Tiger himself didn’t hesitate to try and put Kim in his place last year by ridiculing his AK belt buckle. But Kim took it in stride with a rebuttle, “”Well, Nike hasn’t put my initials on anything yet.”

Well, I for one, was happy to see Anthony Kim let his clubs do the talking this weekend, blasting to a 5 stroke victory at Quail Hollow yesterday. At 22 years old, AK is the youngest PGA winner since Sergio García won his third title at the Mercedes Championship in 2002.

Kim’s fellow players know that the young gun has great promise. In fact, Jason Bohn compared Anthony to the world’s number one, “I played with somebody who played extraordinarily good, almost Tiger-esque’’.

Watching Kim on the 18th green yesterday was just great. He could hardly contain himself before his last putt – the grin sneaking out time and time again as he was trying to focus on closing it out. It was so cool to see that kind of excitement in a winner.

“I’m a little bit numb right now, but that walk up 18 was the best feeling of my entire life,” Kim said. “I’ll never forget that feeling. I had chills going up and down my spine. I want to recreate that as many times as possible now, so I’m really going to work hard.”

I think this will really propel Anthony into more wins this year. He admits freely that a year ago he was immature. That’s pretty humbling to admit, but I think he really did show this weekend that he’s grown up a lot. At 22, he has a long way to go and from my seat…it looks like it will all uphill from here to the top of the leaderboard many times over.

I wouldn’t be surprised if he is responsible for breaking the Tiger Grand Slam streak in 2009 like Immelman did at the Masters this year. The next Tiger
by Andrew Both in Charlotte, North Carolina
The Daily Telegraph (Sydney)
05 May 2008

A 2 year-old KoreanAmerican appears destined to be the world’s next great golfer, whether or not he wins the Wachovia Championship today. Anthony Kim charged to a four-stroke lead after the third round at Quail Hollow yesterday, and those who have…read more…

Related:
Kim lets his game do talking
Tech Tags: The Daily Telegraph (Sydney) newspaper Main Game
Pamper yourself on Maui! Book your little piece of heaven in golfers’ paradise. Book now at http://www.vrbo.com/424659 and tell them Golfgal sent you!