Another Sting by Vijay Singh 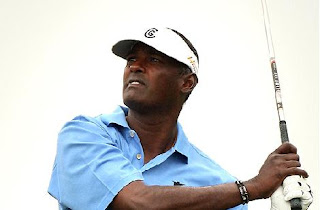 Not sure how I missed this story earlier this week, but it really doesn’t surprise me too much. Vijay has gotten himself into media trouble before.

He sure isn’t afraid to say what he thinks, is he? And obviously he’s been thinking that the UK players are slacking off…

“Lots of them start out with the right intentions and the opportunities are there for them to become great,” Singh said. “ Once they’re on tour, though, they find themselves having a fine time and wondering, ‘Why should I bother to work hard?’ Their way of life is so comfortable that it doesn’t matter if they have a bad tournament. The disappointment is not as big any more. There’s another event the following week and they just move on.”

I actually don’t disagree with Vijay on this issue, but I don’t think it’s a problem with just the British players. Heck…look at how many millionaires there were made in 2007 on the PGA – 99! And look at how many winning players lose their cards on the PGA Tour every year after many years of success – Lee Jansen comes immediately to mind (winner of 8 PGA tour events, including 2 US Opens, he lost his card in 2006 and failed to qualify for 2007). BTW…he missed the cut this weekend.

Not to pick on Janzen, I think that a lot of PGA players start to take it easy when they hit “Easy Street”. John Daly could be the poster child for this group.

Some, not all, PGA players don’t seem to have the same hunger they once had. I just heard this week on The Golf Channel by one of the analysts (I wish I could remember who it was), but he said he was convinced that Phil was a more talented player than Tiger, but he just didn’t have the work ethic. That’s a pretty bold statement don’t you think?

Anyway, with comments like this, I don’t think Vijay should plan a career in golf media after he retires from the game. But he’d be fun to watch – he’d put Johnny Miller to shame with his less than politically correct barbs. VIJAY SINGH last night sparked a row ahead of this week’s US Open when he claimed British golfers were failing to win a major because they did not work hard enough. The Fijian, a winner of two USPGA Championships and a Masters, said too many of them…read more…