Monty needs a Miracle at this Major 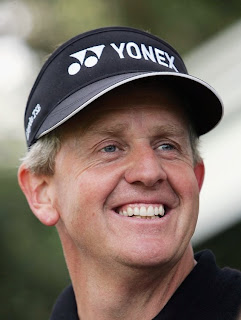 If you like Monty like I like Monty, then you should check out this story in the Independent below. It’s full of good quotes, some humor and definitely some “oh really’s!”.

“I think I will play in 15 to 20 more majors, of which I expect to really contend in four,” said Montgomerie. “And one of those four I will really contend. Not just top five or backing my way into fourth. But really, really contend. I have one golden opportunity left when I will be right there. That will be my chance. And I’ve got to take it, otherwise it is not going to happen for me.”

When I first read this, I thought he must be delusional. How does he possibly think he’ll really contend in 4 majors over the next 5 years? Look at his record of majors to date.

Even in his best years, Colin has struggled. And in the past 7 attempts at majors, he didn’t qualify for 1, missed 5 cuts and tied for 42 in the other. Sure he had a near miss in 2006 at Winged Foot, but that was two years ago.

Yes, Monty has won 31 times in his professional career and proudly held the honor of the Order of Merit 8 times. He’s played in every Ryder Cup since 1991 and he’s considered a Ryder Cup legend – undefeated in eight singles matches. He holds 2 Ryder Cup records:

Monty was once mighty, but today, mostly Monty is just miffed.

Now don’t get me wrong. I really do like Monty very much. I always enjoy watching him on TV and I find his grumpy, growly, grizzly demeanor very entertaining, if not “endearing”. He’s just kind of loveable – a curly haired teddy bear (a little over stuffed perhaps, but cuddly anyway).

Some have called Monty the dark horse at this week’s US Open – an understatement if there ever was one. But I believe in miracles, so this weekend, I’m hoping for Monty to play as if an angel is sitting on his shoulder. Play well Monty! Let’s give Nick Faldo a reason to pick our favorite Scot for the 2008 Ryder Cup Team. It won’t be the same without you. The statement has been made before; boy, has it been made. Indeed, in certain media fourballs the “that’s that for Monty” have even started to rival the “fores” in number. And believe it, there are an awful lot of “fores“. The man, himself, has heard…read more…
Tech Tags: The Independent newspaper Golf Countdown To The Us Open
Pamper yourself on Maui! Book your little piece of heaven in golfers’ paradise. Book now at http://www.vrbo.com/424659 and tell them Golfgal sent you!