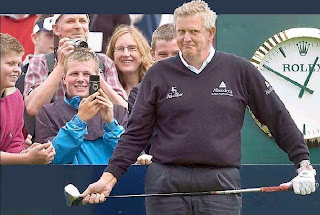 Monty Monty Monty…For an “old man”, you sure do act like a big baby sometimes. How many feet can you put into your mouth at the same time? More than most, that’s for sure!

I probably blog more about Colin Montgomery’s tantrums than I do about any other golfer’s quirks. But that’s because he’s such a great target.

They say he’s a charmer at home, but you have to wonder….Is he Dr. Jekyl/Mr. Hyde? He definitely is NOT a good role model for golf when it comes to patience, kindness and being a gentleman on the course.

This latest run-in with golf analyst Ewen Murray seems even a bit over the top for the great Scot. It is said that Murray was so upset by Monty’s remarks at last week’s European Open that he called the incident ‘the most sickening minute I have experienced on a golf course.’

Can you imagine the arrogance of a golfer saying to someone on the course, “I am the reason you are here, and don’t forget that!”

Hmmm…I guess Monty was not fortunate enough to attend a “First Tee” camp when he was a boy to learn their 9 core values.
So he apologized…big deal! I think that sort of behavior in a “more than grown” man is just inexcusible. It’s one thing to get mad at yourself, but to take it out on others is just so immature. When will he grow up?

What bothers me the most is that he said, “You know what I’m like. I do things in the heat of the moment that I later regret. I was clearly out of line on this occasion.” “This occassion????” And what number is this! You’re out of line almost every week.

I think my disappointment is stronger than most because I really like Colin Montgomery and want him in the Ryder Cup this year. He’s always been a favorite and I try to laugh off his conduct, but he’s starting to lose my undying support.

Time to grow up, not out, Monty. Your fans are getting a little impatient with you…

Meanwhile, let’s enjoy this week’s Scottish Open. For me, it’s going to be much more fun watching Ernie Els, Adam Scott, Ian Poulter and Phil Mickelson battle the elements at Loch Loman, than watching the “good ole boys” at the John Deere Classic. COLINMONTGOMERIE issued an apology last night to a Sky Sports sound technician he verbally abused during the European Open last week. Bad behaviour and the Scot are no strangers, of course, but this episode was the worst yet, according to Sky’s main…read more…

Tech Tags: Daily Mail newspaper Sport
Pamper yourself on Maui! Book your little piece of heaven in golfers’ paradise. Book now at http://www.vrbo.com/424659 and tell them Golfgal sent you!