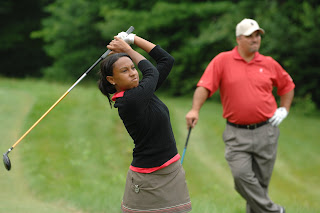 Big Breaks are all about immunity + elmination – and we’re all prepared for that. But tonight I almost wished the Golf Channel only showed the immunity challenges. They were so great, especially Robbie’s and Haymes’ glass breaking exhibitions. I’ve seen Tiger miss those numerous times, along with Mike Weir, Vijay, Furyk and others.

Lucky you say? Of course…but I’d rather be lucky than good.

Although the elimination challenge was tough to watch, Rachel made us women proud when she channeled her anger after David’s comment about her lack of experience and nailed that tee shot 4 feet from the hole. And Sally brought it up a notch for me when she hit that great shot in the playoff after struggling in previous shows with her irons.

The team dynamics between Sally and David were somewhat disturbing (even Sally said they weren’t gelling that day). Was this a case of well edited sound bites or was it as “charged” as it looked on TV? I had to ask the contestants this week what they thought about that (and Robbie’s amazing glass shot, of course).

First, let’s hear from Amber, the winner of the immunity challenge and $5,000, with just one good shot! Nice job if you can get it!

Michael, who had just come back from an elmination challenge the day before, was feeling a bit nervous going into the day, but that didn’t stop him from hitting a great first shot on the first challenge, break the glass on the second, and hit another great shot in the final immunity challenge to avoid elmination…

It’s now Wed AM and I just got off the phone with Andrea. She was in the unique position of knowing what would happen, but watching it for the first time. Always great to get her perspective…

Just got off the phone with the man who wastes no time over a ball – Haymes Snedeker. Rachel said he doesn’t even have a preshot routine. I wonder if he passes judgement that fast in court 😉 I always enjoy my chats with Haymes – such a nice guy and yet not afraid to say what he thinks…

Tip of the iceberg? Hmmm….

Well, that made me want to chat with David even more. I was lucky to catch him today and I have to say…he gave a great interview. I hardly had to talk at all :). It’s a bit longer than the others, so grab a coffee and sit down and listen. I think you’ll be entertained. I certainly was and I most certainly heard things I’d never heard before. 😉

So next week sounds like we’re going to see the rest of that iceberg. 🙂 I can’t wait!