Wow! Are you as amazed as I am at Haymes’ ability to pull off the shots when he really needs them? He started off behind the 8 ball tonight and then nailed a drive when it looked like all was lost, followed by a great shot over the water. They say golf is a game of inches and we sure saw that tonight…first with his “almost great” shot that ended in the sand and then that terrific shot that just got over the water.

I don’t know about you, but I thought Haymes and Bernie were going to take the walk tonight, after the immunity challenge and then that first hole on the elimination challenge. But, I have to say, when I saw Haymes’ smirky grin after Bernie said, “I wasn’t going to let anyone beat me that shouldn’t beat me.”, I knew they were safe. That’s exactly how my golfguy looks when I say something with grim determination. Ain’t nothing going to stand in my way when I talk like that! Haha…you go Bernie! Haymes, word of advice – you should not take up poker 🙂 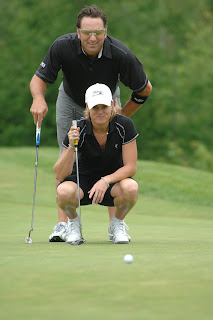 So tonight Sally and Dave finally got to part ways.. I wonder if they both breathed a sigh of relief. I expect that’s true….sad, but true…But they have to be proud about how they pulled it back together after some pretty shakey shows.

They really played well on the last episode and started the elimination challenge tonight strongly. So they didn’t go out with a whimper. They played hard up to the last bunker shot from Dave and Sally’s putt that ran oh sooo close. They were still in it to the end.

So it was a great elimination challenge. What I really liked about it was that it was two full holes of golf for both players on both teams. That made it real and far less quirky than say, the between the wall shots. Not that I don’t like those kinds of unusual challenges -they make the show fun. But those should only be part of immunity and never elimination. Tonight it was set up perfectly for me – fun followed by fight.

Michael once again kicks off this week’s interviews with me, but this time, I had to start by asking him about one of our golf forum buddies who, by luck, was paired with Michael at a club recently and made some pretty nice comments about Michael’s game and personality….

You could tell that Michael wanted to say something about next week’s show, but was biting his tongue. Obviously something happens that he can’t wait to see for himself. But like all of us, he’ll just have to wait.

Just got off the phone with David. He was pretty open about his feelings after last night’s show and what he took away from the whole experience.

I love the ‘quote’ that David shared…”The body doesn’t know how to choke. It’s your mind that gets in the way…” That is so true, isn’t it? I am happy David has agreed to future interviews after the last few episodes. It will be very interesting to get his perspective from the sidelines and also…don’t forget to read his blog this week on Golf Channel. I’d like to know your thoughts on his proposal for a future show.

Next up…Sally. Had to ask her about her camera man after David’s interview 🙂

Sally’s views of things are a bit different than David’s. Why am I not surprised? 😉

I was happy to be able to interview Haymes “Peppermint Patty” Snedeker this AM before he heads out for Thanksgiving. He sure has a way with words (and his golf isn’t too bad either ;))

I’ll let you know when I hear about Bernie’s skort designer.

Andrea was in between tournaments so I wanted to check in with her and find out what’s been happening in elimination alley and what her thoughts have been watching the last few weeks of BB X.

Andrea, I know I speak for all the BB’ers and readers when I say, “You go girl at Q school finals!” I can’t wait to hear you’ve got our LPGA card all wrapped up.

Well, we’re down to the wire – only 3 teams left. Who do you think will go home next week? Given all the surprises we’ve seen so far, I’m not laying any bets.