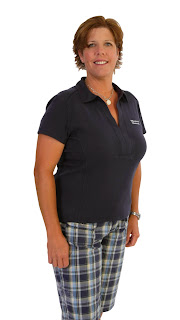 Well, it’s only 8 more weeks until the debut of Big Break PEI, and I can’t wait. Although I’ve watched all the Big Breaks, Big Break PEI will be the 3rd in the series where I get to interact with the contestants as they bite their nails watching themselves on TV.
My interviews with many of the Big Break and Highway 18 golfers last year were so much fun. I’ve made many new friends from the shows and from the fans who enjoy the interviews almost as much as I do.
Oh sure, we love to sit back in our easy chairs and pass judgement on their talents, behaviors and comments, but if we were really honest with ourselves, we’d admit – we’re @$#9~)> jealous! Being on the Big Break is one of the best things that could ever happen to a golfer and…one of the scariest. No one knows that better than Sherri McDonald of Big Break Michigan.
I recently connected with Sherri and discovered that she’s as nice in person as she appeared to be on TV. And, yes… she is also competitive and determined.
Can you imagine being told that you wouldn’t be able to play golf past the age of 24 because of back and hip problems? Well, that didn’t stop Sherri. After playing college golf at Penn State University, Sherri began teaching and coaching while pursuing her pro career. She was determined to play on the Duramed FUTURES Tour and in 2001 found herself a sponsor (not easy for young women golfers to do, believe me!).
But as bad luck would have it, her sponsor went out of business as a result of 9/11 and Sherri had to give up her dream, for a while. However, being a talented, driven and confident young woman, Sherri landed on her feet and was hired as the women’s head golf coach at Monmouth University in 2002, where she continues to help young women follow their dream.
Sherri and Michael Michaelides were a great team on Big Break X. Although they didn’t make it to the finals, they both came out winners in my opinion because they played like winners, kept their cool and were friendly with everyone (remember when they played referees for Sally and Dave when S&D wouldn’t ride in the same carts together?). Yup, Sherri and Michael set great examples for their students who were glued to the tube every Tuesday night.
I had the pleasure of chatting with Sherri yesterday about her experience on the Big Break Michigan and asked her what advice she would give to the Big Break PEI folks heading into April or anyone who is thinking of applying for their Big Break in the future…
I’m so pleased that Sherri has agreed to join me every couple of weeks and talk about the hot topics in golf. We’ll most likely start with the obvious ones about challenges for women golfers and how to get more women into the sport. And, of course, I’ll have to get her thoughts on Big Break PEI as the show progresses, but if you have any topics you’d like to have us chat about, just let me know.
Golfgal
Pamper yourself on Maui! Book your little piece of heaven in golfers’ paradise. Book now at http://www.vrbo.com/424659 and tell them Golfgal sent you!