When will Camilo Villegas overtake Phil in world rankings?

At the beginning of the year, a male friend of mine (who wishes to remain nameless, but is as addicted to golf as I am) said that he thought that before the end of 2009, Camilo would pass Phil in the world rankings. Currently Phil is number 4, Camilo 11. But as my friend reminded me, Camilo was at number 7 at the end of last year and so there was only 3 spots between them at one time.

Needlesstosay, I was a bit shocked by this forecast. I love Camilo (okay okay…I lust Camilo), but Phil is…well…”Phil!”. He has talent, experience and more talent. He’s Phil!

Now…I’m not the biggest Phil fan in the world – he doesn’t wind my crank much – but he certainly is entertaining with his high risk shots. Camilo is also the consummate entertainer with his spiderman moves, dazzling smile, great attitude on the course and a body made for pleasure (not his, ours! ;)). And as cranks go, mine is in overdrive when the Columbian Stallion on the tube.

But to think that Camilo could overtake Phil in 2009? I don’t know….seems a bit far fetched to me – maybe in a few years when age creeps up on Phil…but this year? Hmm….I just don’t see it.

So my friend said…check their current stats…. 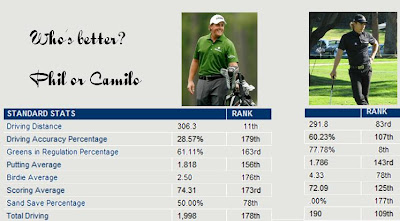 Okay…now these numbers surprised me. Camilo beats Phil in what I consider to be the most critical statistics. Sure, Phil is longer, but his accuracy sucks. And everyone knows Phil’s sand work is incredible, but maybe that’s because he’s in them so much (check his GIR). Speaking of which…look at the GIR and driving accurcy stats. Those tell me that maybe my friend isn’t off his rocker after all.

But in my mind, Phil’s still a winner in many ways. Let’s look at the stats that really matter… 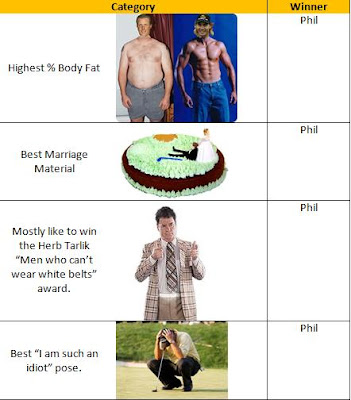 Hard to argue with these, especially the “Marriage Material” category. Winner of the David Feherty “HAUTE COUTURE FERRET” award, Villegas is someone you don’t want to take home to mom – she might try and steal him :).

Yup…Feherty had it right when he said…Spiderman “could wear my grandad’s long underwear with the18-wheeler skidmarks on the trap door and still looklike a Calvin Klein model.”

Now you have all the facts. Who do you think will be on top at the end of this year – Lucky Lefty or Sexy Spidey?