Big Break Disney 3 – “Skip to my Lou” Kmax gets dunked 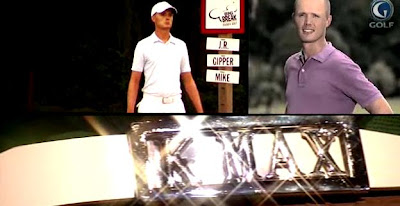 It was one of those happy/sad episodes for me on Big Break Disney this week. First I was really happy that Kevin Erdman escaped his second elimination challenge (Although I think he’s trying to give me a heart attack!), but I was sad to see Kevan Maxwell, better known as KMAX, leave this week’s show.

If ever someone needed a big break, it is probably KMAX – a highly passionate golfer who works as a caddie by day and delivers pizzas at night to scrape together money to pursue his dream. And it doesn’t hurt that he loves his dog a lot too – I am a huge dog lover! 🙂

But as sad as it was to watch him leave so early, something tells me that KMAX will “be back” as Arnie would say. You can’t put a golfer down with that much confidence and passion. So Kevan, I wish you all the best!

Meanwhile, we had a jam packed show tonight with lots of great challenges and tension filled drama between Andrew and Blake. And who was in the middle of that drama, but our friend Vincent. How fun was that Vincent?

Now on to Blake….Besides being happy about escaping elimination, I wonder what he thought watching the show tonight. I am sure we only saw a tip of the iceburg in terms of the tension between himself and Andrew. It looked like a long day, starting with breakfast where Mike tried to get some peace and quiet, but Andrew was having none of it, and Blake had had enough of Andrew…

Looks like even more tension next week. Don’t you just love it! 😉

Now there were a few people who seemed to disagree with Erdman’s decision to lay up after Maxwell put his first shot in the water, but as KMAX said in his exit interview, he would have taken out a putter if he’d seen either Sean or Kevin drown their first shots. And it is hard to argue with those decisions given both of them are going to be on next week’s show. It’s not like Kevin isn’t prepared to “go for it” – we saw that in the last challenge – 230 yards with his hybrid. I wonder what he thought about all those comments…

Mike Perez joined me this week and shared his thoughts on the challenges, the drama and the “not so special” guest, PGA tour pro, J.B. Holmes. Gotta love Mike – always has honest, shoot from the hip comments. Haha…Thanks Mike!

Tony will join me Wed night for his interview this week. So come back to hear what he had to say about this week’s excitement.