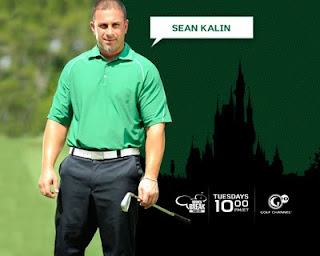 This was probably one of the most nerve racking Big Breaks for me in a long time. While the guys were playing flop shots, my stomach was doing flip/flops as I watched Kevin and Blake inch their way towards elimination. But thankfully they both survived to live another day. Whew!

Unfortunately Sean’s luck ran out today as he slowly chipped (or should I say chunked) himself off the show.

But given he hasn’t got the experience of the other guys he should hold his head up high knowing that he played some pretty clutch shots during his 4 episodes. The last risk/reward hole in episode 3’s elimination comes to mind.

Tonight I had the pleasure of interviewing Vincent and Blake together on the phone. What a treat that was for me! They were with Blake’s family, enjoying watching the show and having even more fun watching Blake’s family squirm in their chairs…these boys are cruel 😉

Kevin avoided elimination tonight by the skin of his 3 wood. Ouch! I just had to ask him about that. HaHa! Maybe I’m a little cruel too!

Lesson learned…never hit a soft anything, especially when nervous. Club down, use the natural adrenaline the nerves give you, and grip it and rip it!

Haven’t caught up yet with Tony or Mike. Perhaps they’re busy with Q-school. But I’ll keep trying. Meanwhile, I’m heading to Maui for almost 3 weeks of golfing in paradise. But I’ll plan my tee times around the Big Break so I won’t miss a shot.