Well, a number of people will be pretty disappointed this week watching Andrew Giuliani exit stage left on the Big Break Disney. And, you may be surprised to learn that I am one of those people.

I know, I know… some of you think I don’t like him, but that’s not true. I can’t dislike someone I don’t know. All I know is the guy on TV who said things that ticked off his competitors and made me laugh out loud. And tonight was no exception. 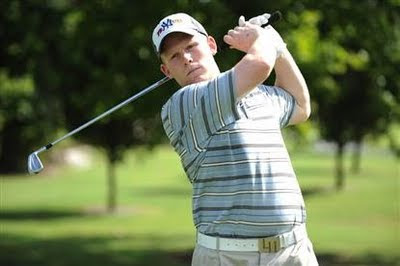 Andrew’s comment about being shorter off the tee could be an advantage because he could hit first into the green was pretty funny. And comparing himself to Tiger Woods at the end – even his biggest fans have to admit – that was too much.

But you have to give him credit – he was a great showman every week and added a lot of entertainment value to this series. And not once did we see that temper we all read about when he was at Duke.

I wanted to interview Andrew the minute I heard he was on the Big Break way back in July, but when I asked for an interview I was told he was off limits. Maybe he is more like Tiger Woods than we think 😉

Yes, Andrew added a lot of drama to the show and stirred up the contestants with his constant talking, but there is no question he has talent. And he’s already proven it – he won his first event as a pro – the 94th Met Open Championship held on Aug. 27 – only weeks after the Big Break ended its taping. So why would I want him to leave?

Now who is Gipper going to want to take out? Who will be the fly he can’t kill next week? It looks to me like a big lovefest between the remaining contestants as far as I can tell. Or is that really true?

Maybe not…just maybe Kevin will be the target now. Certainly his continuous “Wows!” and “How am I still alive?” outbursts have rubbed a couple of people the wrong way, including his buddy, Mike Perez. I couldn’t wait tonight to ask Mike and Kevin what each of them thought about Mike’s retort, “If you don’t feel like you should be here, why don’t you just leave?” LOL!

Tony rejoined the interview train this week. I’m so glad he did. I really wanted to find out if the Andrew/Gipper rivalry was mostly good TV editing or was there really an issue there…

I caught up with Blake early Wed to get his take on the first show since his elimination and how he felt about Andrew leaving the day after him. I think you might be surprised by some of the things he said.

Vincent always has some great commentary each week. I love chatting with him because I know I’ll get very insightful observations. He never disappoints…

Now, has this series flown by or is it just me? I feel like we just got started and suddenly we’re facing the final 4. Sure would be interesting to see Tony and Gipper face off. I wonder if they’ll be the last two standing. What an ending that would make! I guess we’ll just have to watch and see.