Well, the wait is over for all of us Big Break fans.  Big Break Sandals has finally been announced.  And it’s promising to be the most entertaining Big Break since the ladies battled it out in Maui in 2008.

Check out this line up of chicks with sticks… I know only one of these ladies personally and can’t wait to see how she does – Sara “No H” Brown.

Sara Brown (24, Tucson, Ariz.) – After a successful collegiate career at Michigan State University and a stellar rookie season on the Duramed FUTURES Tour, Brown endured a “sophomore slump” in 2009, to the point where her usual smile turned to frustration, nearly causing her to quit the game.  Refreshed and energized after a winter hiatus, Brown has her eyes set on winning Big Break Sandals Resorts.

I interviewed Sara last spring and was immediately drawn to her bubbly personality and fabulous sense of humor.  I finally got to meet her in person and see her golfing talents when she competed in our CN Women’s  golf event last spring in Vancouver.

Sara was very impressive ending up in a tie for 3rd place, 1 back from Courtney Erdman of Big Break Ka’anapali.   I am excited for Sara that she’s been given this opportunity to break into the big leagues.  I think she can do it and can’t wait to watch her every week get 1 step closer to her Big Break.

Another golfgal that really interests me is a fellow Canadian – Stacey Bieber.

Stacey Bieber (25, Fort Worth, Texas) – Born and raised in Winnipeg, Manitoba, Canada, Bieber nearly quit golf after college to pursue a professional career in investment banking.  Realizing she could not give up her dream of one day competing on the LPGA Tour, she re-dedicated herself to the game.  Her goal is to be on the LPGA Tour in 2011.

Canadian’s have been pretty successful in Big Breaks before.  Let’s not forget Derek Gillespie won Big Break PEI in 2009 and Christina Lecuyer was in the final four on Big Break Ka’anapali.  I’ll always have a soft spot for Christina — she was the first Big Breaker I ever interviewed and kicked off my weekly interviews on that show and every Big Break since.

I hope to get a chance to talk to Stacey during the series and get to know her better.  She’s got good roots growing up in the city that will host this year’s Canadian Women’s Open.  And she going to have a bunch of passionate Canuck golfers, including me, cheering her on, all the way to the LPGA.

Here are the rest of the ladies…

Lili Alvarez (26, El Paso, Texas) – One of Mexico’s elite amateur golfers who grew up competing alongside Lorena Ochoa, Alvarez’s fun loving personality is infectious on the Duramed FUTURES Tour.  A student at Tulane University in New Orleans who endured the devastation of Hurricane Katrina, Alvarez learned to appreciate life to the fullest.
Chris Brady (25, Charlotte, N.C.) – The lone contestant who had exempt status on the LPGA Tour (2008), Brady hung up her golf clubs when her game and the economy took a downturn in 2009 to pursue an engineering career.  Big Break Sandals Resorts will be her test to see if she has the competitive fire and passion to resume her golf career and attempt to return to the LPGA Tour.
Carling Coffing (24, Middletown, Ohio) – A sweet, Midwestern young lady on the surface, Coffing is a tough competitor who has overcome enormous odds to achieve her dream to be a professional golfer.  Coffing was diagnosed with Type I diabetes at age 5, and after years of giving herself dozens of shots every day, she switched to a diabetic insulin pump in 2008, which is connected to her 24 hours a day.  Coffing now competes full-time on the Duramed FUTURES Tour.
Taryn Durham (24, Glasgow, Ky.) – The quintessential All-American sweetheart, Durham has the looks, the southern charm and southern accent.  While Durham’s resume stacks up with her fellow competitors, she has an edge over her fellow competitors in that she is the only contestant who has competed in a Major Championship (2007 U.S. Women’s Open).
Ryann O’Toole (23, Los Angeles, Calif.) – The youngest competitor on Big Break Sandals Resorts, O’Toole’s mission is to dominate women’s golf.  A recent graduate from UCLA – she was a teammate of fellow contestant Maiya Tanaka – O’Toole also is one of the longest hitters in the field, averaging more than 260 yards per drive in tournaments she has played in 2010.
Elena Robles (26, Redondo Beach, Calif.) – A fierce competitor who works numerous odd jobs to make ends meet (substitute teaching, modeling and serving as an extra in television and film), Robles has a history of having a fiery temper on the course.  After finding faith and re-dedicating herself to golf in 2009, Robles believes her goal to compete on the LPGA Tour is within reach.
Seema Sadekar (24, Las Vegas, Nev.) – One of the most fashionable players on the women’s golf circuit – she has a custom-made golf bag covered in faux diamonds and wears stylish golf attire – Sadekar always manages to be noticed wherever she goes.  In addition to competing full-time on the Duramed FUTURES Tour, Sadekar is heavily involved with her older sister’s golf events company, and also is co-founder of a golf marketing and apparel company.
Kelly Sheehan (32, Orlando, Fla.) – The lone contestant who has not competed full-time on the professional circuit, Sheehan plans to channel her 10 years of experience as a certified PGA of America and LPGA teaching professional to overcome the various challenges facing her on Big Break Sandals Resorts.
Maiya Tanaka (24, San Diego, Calif.) – A success story from The First Tee Program, Tanaka currently lives out of her car and competes on four professional golf tours (Golden State, California Players, Cactus and the Duramed FUTURES Tours).  Tanaka and fellow Big Break contestant Ryann O’Toole were teammates at UCLA and are longtime friends. 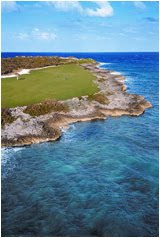 Sandals Emerald Reef Golf Club at Sandals Emerald Bay will host this series and designer Greg Norman is expected to make an appearance on the show.  Lucky ladies!

So, the question is…who should I interview each week?  Hmmm….Sara and Stacey are obviously high on my list, but I really don’t know the others well enough to choose. Who do you think would add some spice to the weekly episodes and interviews? But not too much spice – I really would rather not have a return of the drama of Big Break Ka’anapali.  THAT was over the top! 😉