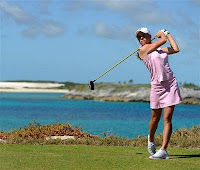 I always hate it when the contestants I’ve come to know and interview finally take the walk on the Big Break. I never know when, or if, it will happen, but when you interview 3 ladies every week, you know for sure at least 2 of them will be in this position at some point.

Taryn was given two “Saves” by other contestants during the series and that might make one think that her game was not up to the level of some of the other players.

But that “one” would be wrong.  Let’s not forget that Taryn is the only contestant to play in a Major – she qualified as an amateur for the 2007 U.S. Women’s Open in Pinehurst.  And she was a tough cookie in the previous elimination challenges she found herself in.  She’s no pushover!

Taryn certainly showed class, style and talent through her 8 episodes and she will be missed going into the final 2 shows by me and all her fans.

I spoke with Carling (Aquawoman) this week about Lili’s immunity, her water shot, rock shot and Sara’s self-imposed penalty.  It was certainly a exciting episode and Carling had lots to share about herself and fellow competitors…

Didn’t get a chance to chat with Sara this week, but I did talk with her father about a great initiative he’s involved with to support women’s golf.  Check back with me later this week on that.