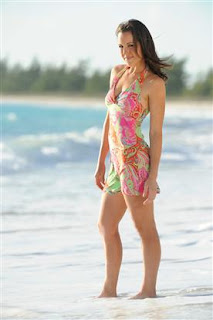 The old adage, “Drive for show; Putt for Dough!” certainly rang true on those 18 holes.  Lili said it best, “Carling was a putting machine!” Wow!

What a perfect ending to probably my favorite Big Break of all time.  Lili is certainly a great player and I feel badly for her that she won’t be able to play in Lorena’s tournament, but Carling is a well deserving champion. I’m so happy she was open to my interviews every week.

People always ask me if I know who will win.  I never do.  I pick some names based on reading their bios and watching their videos on Golf Channel.   If my choices are eliminated, I add more to the mix.  I did try to talk to Lili right at the beginning, but could never connect with her.  Too bad.  But at least I wasn’t really torn between contestants last night.  It made it a bit easier.

This Big Break had just the right about of drama, without going over the top like some others (Ka’anapali & Michigan come to mind).  I liked how they introduced Send/Save as well, but it would have been more interesting to have someone “sent”.  Yes, I do have a nasty side from time to time.

The only thing I missed was the wall shot.  Not sure why they took that out of the show, but it was always fun to watch the contestants try and flop it.

Carling is having a crazy busy day today after her win, but she was kind enough to squeeze me into her busy schedule.  She’s that kinda golfgal.  Not all other winners have done that in the past.  Thanks Carling!

Well, Carling, you should publish that drill book – I’ll be your first customer!

Caught up with Sara Brown in Florida this week while she was having fun with her college buddies. Oh to be young again! She shared her thoughts on the final show and how excited she is about being part of Big Break Dominican Republic.

Earlier this week, I invited one of my readers, Bluefalcon, to provide a pre-show commentary on the blog.  I am pleased to offer you his post-episode comments here (could never fit this into Blogger’s commenting window :)).  These are his comments…we don’t always agree, but I sure do appreciate where he’s coming from…

The best season in BB history came to an end on Monday night with the “Big Break Sandals Resorts” finale, and while I wouldn’t call it an epic or classic finale, it was definitely intriguing and compelling.
From the very beginning, I felt that Carling Coffing had an advantage over her playing competitor, Lili Alvarez. In the pre-match interview, Lili was talking about how she was thinking about her friends, family, the Lorena Ochoa Invitational-one of the tournament exemptions on offer-so clearly she was thinking about things other than playing Carling. Carling, on the other hand, was focused on what was directly in front of her; winning the match.  Even when Paul the Butler was wishing the ladies luck, Carling was relaxed and calm, while Lili looked grim and distracted.
When the format for the event was announced as match play, I immediately felt that Carling would have an advantage. Why?  Something Lili said previously about Carling being the type of player-I’m paraphrasing here-who would just par and par and par you to death.  That’s the type of player who can do well in a match play environment.
Game on!  All square thru 1 as Carling’s putt burns the edge of the hole. On hole 2, Carling dunks her tee shot.  Lili takes advantage. Lili 1up thru 2.
On Hole 3, Lili gets lucky while Carling finds the sand.  However, Carling would prove to be strong out of the bunker, and even better on the greens, while Lili’s putter started cold and would barely break lukewarm the rest of the way.  This was the first signs of cracks in Lili’s armor, as she was clearly frustrated and cursing after missing a putt. That, sadly for Lili, was a harbinger of things to come.
Holes 5-6, Carling striping her irons and wedges, the hole looking to Lili like the circumference of the eye of a needle.  Both ladies in the hazard at 7, first Lili, then Carling followed her in.  Another example of Lili pressing off the tee.  Neither capitilized on the other’s mistakes.  However, Carling was being helped by a hot putter.  Lili, being hurt by her cold one. AS thru 9.
Hole 10, Lili with another huge mistake, opening the door for CC rider-I’m dating myself there-but Lili FINALLY! makes a putt.  AS.
Both stumble at 11. Carling calls upon the Short Game Doctor from the bunker, but sadly, all she gets is a first year intern.  Lili finally seems to be getting momentum. Lili 1 up thru 11.  First time Carling is panicking.
Lili makes ANOTHER mistake at 12. WTF, Lili?! Carling’s similarly off line.  However, for the first time, Lili’s approach shot is butter!  But once again, Lili can’t make a putt to save her life!  Carling also can’t get it done.
Carling with a LASER at 13!  Lili trying to convince us-and herself-that she’s okay. In fact, she’s not.  Lili still has an arctic putter.  Carling with the dagger at 13! This, to me, was the story of the match. Carling’s putter was hotter than July; Lili’s was frigid as December in New York.
Lili tries to apply tourniquet on 15.  Still bleeding profusely after another horrible tee shot.  Carling plays smart, but muffs her approach to a side hill lie.  Lili sticks her approach, but once again, the putter is not on Lili’s side.  Carling lets her off the hook, however.
Lili on 16, off the rocks, into the fairway, nothing but net.  Carling again, can’t take advantage; makes poor shot of her own.  Lili makes adequate approach, but again, Carling fails to walk through open door.  Lili mentions if her game continues like this as a pro, she may be retired by 31. (Lorena Ochoa retired at 28; if Lili continues to play like this, she may be out at 28 as well!)  However, Lili does staunch the bleeding a bit on the green.
Lili strikes with lightning’s hand at 17.  Carling can’t do same.  However, Carling drops a dime from 25 feet!  Way to go, Carling!  Once again, the story of the match is Lili’s putter failing her yet again.
Penultimate hole. Lili makes yet another MASSIVE blunder, hitting her ball behind a small tree. Stick a fork in Lili, she’s done!  Not quite.  Carling’s approach not her best shot, but not bad. Lili gets out of jail with great shot.  However, again, the putter-the one club where nerves and emotions can have a negative effect-is Lili’s anathema. Carling WINS!   Congratulations to both ladies, Lili for being classy all the way through and Carling for earning a hard fought win.
While I admittedly have issues with some of Carling’s actions-Gayle and I clearly disagree on this issue-Carling is certainly a deserving winner and has the kind of personality which will serve her well wherever she goes and whatever she does.
This was by far the best “Big Break” season for me, in no small part because this was the most physically attractive cast in series history; there was a swimsuit calendar made with the cast of “Big Break 5, Hawaii”.  Frankly, this would have been a better cast to do that with. Sadly, that doesn’t seem to be the case.  Another reason for enjoying this season: a lack of on-camera drama.

Haha…Bluefalcon, blue through and through (assuming blue is for boys and pink for us golfgals). Thanks so much for putting so much thought and effort into this!

So Sept 29th we start the drama all over again with Big Break DR.  Who should I interview on that show?  Here’s the cast (I’ve bolded the ones I’ve interviewed during past shows – it will be great to reconnect with them, but please not after every show!).