For The Love of Golf

In my writing and travels I have met a lot of interesting people including tour professionals, coaches, resort managers/directors and of course, passionate golfers. 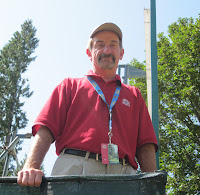 At this year’s US Senior Men’s Open, that tradition continued, where I was delighted to meet a fellow golf fan who not only loves the game, but lives and breathes it too – Mark Fennell from Washington State.

Mark was working the leader board at the 8th hole where I was standing waiting for players to arrive. We started chatting.  I discovered that Mark wasn’t a stranger to volunteering at professional golf tournaments (this was his 25th in the last ~20 years). I thought that was amazing, but then he went on to tell me that there are many volunteers with longer records than his.  Wow!

I learned a lot about the events he’s worked, but what really got my attention was his unabashed passion for the game.

Check out these photos of his office – do you think he ever gets any work done?

When he’s tired of staring at all the golf memorabilia, he heads home in his PGA Tour mobile… 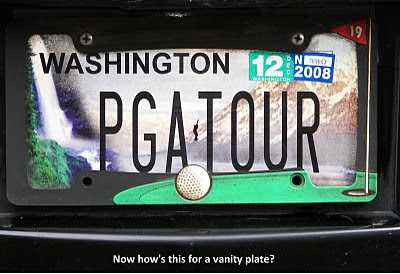 …to a little piece of golf heaven right in his own backyard.

“I still don’t know if I have crossed the line with the property that I have, the license plate and email address.  Even my golf bag which I bought on eBay has PGATour in big letters.  I have a lot of PGA Tour branded clothing including shirts, shorts, socks, hats, and even a belt. Yeah, I don’t know if I’ve crossed that line, but I know I’m pushing it.”

Mark has two ponds, one big and one small in his backyard as well.  He calls them water hazards.  One is built on a slant, so he has railroad ties holding up part of it.  He calls that his Pete Dye effect, given Dye’s reputation for using railway ties in his designs.

He also has a green where he put the flag right in the middle of a tall tree stump that’s about 3 feet in diameter.  You’d have to pitch your ball 12 feet in the air to hole your putt on that green.   I’m sure glad he’s not the greens keeper at my club!

Mark is the first to laugh at himself about his fervor for golf, but the man has competitive drive as well.  “In my early 40s, I knew I was never going to make the PGA Tour, but then, I realized I can play with those old geezers out there.  I’ve had the US Senior Men’s Open at Sahalee on my radar and calendar for at least five or six years now.”

Mark signed up for the qualifying event at Salem with high hopes, “Hey, somebody has to win the event; why not me?  Going in, I was reminded of the line in the Tom Cruise movie, Days of Thunder, where he says, ‘I’m not going any faster; they’re just going slower.’  I don’t have to shoot a great score; they just have to shoot worse than me.  Who knows…you can get on a roll, and get a lucky bounce; you never know.  Miracles have happened, just ask Al Michaels. “

Mark admits he did not play his best in Salem and so his dream of playing in the US Senior Men’s Open at Sahalee with his son (who is in the army stationed in Iraq) on the bag did not come to pass.  But he still got inside-the-ropes at the Open as a volunteer – something even money couldn’t buy you at this year’s major.

Mark plans to volunteer at the US Open in San Francisco in 2012 and Chambers Bay in 2015.  But what’s keeping him focused right now is qualifying again for next year’s Senior Men’s US Open and then the US Senior Amateur when he turns 55.

Mark, I wish you a ton of luck and hope to see you walking the fairways someday with your son caddying for you.  Some may think your passion is a little “over the top”, but let me just say this, “Keep reaching higher Mark!  I too believe in miracles.”