The Home Run King and I

Okay…so this isn’t about golf, but given all the hullabaloo about drug testing in golf, I thought it was worth sharing. And I’m a baseball fan too, so forgive this straying away from the #1 game in the world for just a day – I’ll be back tomorrow gabbing about the Snr Open, Cdn Open, Evian Masters and the Deutsche Bank Players Championship (and of course…Michelle Wie’s return to the game…)

But today…it’s about baseball…

It really is quite sad that one of our heros is considered to be a jerk by so many, but it would appear the Bonds has more enemies than friends (or is this just the media – sometimes you just never know). In golf I’ve heard rumours that Phil used to be “difficult”, but I think that has changed. Mike Wier has a reputation for being “distant” but his latest karaoke commercials are painting a different picture (I think I like distant better :)). Vijay has been documented as being a little full of himself, but overall, the heros of our game seem to really appreciate their fans and rarely get called “jerks” by the media or the fans themselves (or each other).

I found this article quite interesting, especially when they talk about how people form strong personal bonds of love and hate with celebrities who do not know they exist. And how those of us who watch a lot of TV not only report having a wider circle of friends than we actually have but also report being happier than others who do not have such fictional relationships.

I guess the 6 inches between our ears is playing games with us on and off the course.

Anyway…Bonds will break the record and we’ll either cheer or jeer. As long as his steroid use was before the ban, there’s little we can say. And of course, nothing has been proven. If he passes the tests today…he’s safe as far as I’m concerned. 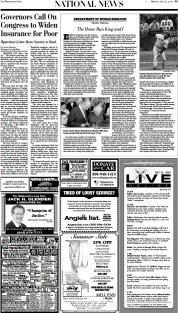