Dottie choking on her “chokin’ freakin’ dogs.” comment? Appears not…

How embarrassing to be caught “on camera” without knowing it, eh? Now all of us have said things in private that were not kind. Let’s face it – we’re human. Is it right? No…but it’s normal. And before we start throwing stones at Dottie for her slip of the tongue, let’s remember the last time we said something we hoped no one would ever hear.

I was surprised she didn’t apologize for her “chokin’ freakin’ dogs.” statement, but at the same time, she said it and she meant it when she said it. So do we want her to lie and say she didn’t mean it?

I guess this one goes down in the “memorial statements” along with Johnny Miller’s when he said that, “Craig Perry’s swing would make Ben Hogan puke.”

Anyway…it was a great tournament and I was very happy to see the US win. I guess it’s because I know the players much better and like so many of them. OR maybe it was because the European outfits were butt-ugly! Man, could they have designed anything less flattering? I don’t think so.

Anyway…I loved the whole event and hope the LPGA will introduce a “rest of world” against the US tournament on the off years. We could play it in Canada and freeze our touchies off here too 🙂

I’m still trying to figure out who Laura Davies doesn’t consider a “friend” on the US team. 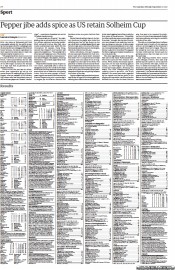 After two days at Halmstad golf club memorable mostly for the spirit shown by the Europeans and for a stinging insult thrown by a former colleague of the United States’ women, the latter capitalised on their superiority yesterday to retain the Solheim… read more…

Related:
US dominate singles for victory