Real men can wear pink (or not…) 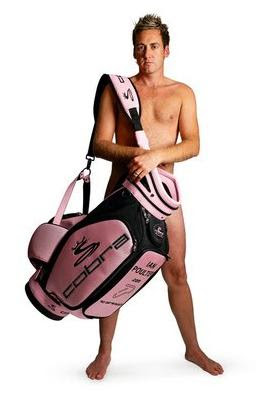 Thank you Darren for bringing some common sense to this “a lot to do about nothing” golf story.

Is it just me or is the media going out of its way to create friction where none really exists between Tiger and those trying to be #2. Where did Ian Poulter say he was going to beat the world’s number 1? I didn’t read it anywhere? He said that if his game was where it could be (ie. if he were at the top of his game) he would be there with Tiger – not above him – beside him (i.e. under him – below him – in number 2 spot). Puleese…he never said he could beat him.

And yeah… he is talented enough to be number 2 (not sure how long, but he could). His game is not quite there yet, but he has the potential as much as Justin Rose or Adam Scott.

So let’s give him a break. And let’s encourage more of his promotion of “pink” golf accessories. But to make sure we treat all things fairly, I think Tiger should do a comparative pose with something “red” 🙂 DARREN CLARKE yesterday offered his support to beleaguered Ian Poulter. Poulter is pictured nude on the cover of a current magazine with only a golf bag to preserve his decency but has come under intense fire from fellow pros for remarks attributed to… read more… WHEN you consider what happened to Colin Montgomerie yesterday, no wonder a recent survey concluded that 44 is the age when people feel most depressed. As you may have noticed, the Scot, who reached that age of apparent dread last June, has been… read more…

Tech Tags: Daily Mail newspaper Golf
Pamper yourself on Maui! Book your little piece of heaven in golfers’ paradise. Book now at http://www.vrbo.com/424659 and tell them Golfgal sent you!