I was very pleased to see the sponsor of HSBC Women’s Champions, take a leadership role in the support of International Women’s Day today. Bravo HSBC! 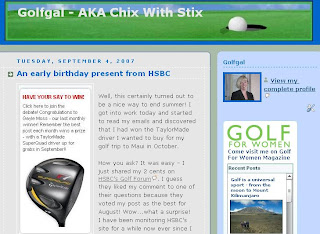 I’ve been a fan of HSBC ever since I won a TaylorMade Superquad driver by making a comment on their golf forum that was voted best post for August 2007. I love that driver! I’ve increased my distance by 20 yards at least with it. And lots of men come up to me and ask to see it 🙂

I was a bit disappointed that no sports companies are involved in any significant way in this cause.

Women athletes struggle so hard for equality. A good example is women ski jumpers (who have jumped since 1924!) being denied entry into the 2010 Olympics. Maybe if some ski equipment manufacturers had been more involved in those women’s issues, the ski jumpers would have had the support they needed to make those cavemen at the IOC change their discriminatory minds!

I wish some of the golf manufacturers who support women’s charities (e.g. Callaway) would step forward. We have our own issues with gender inequality and could use more sponsors recognizing that women make most of the buying decisions in the home.