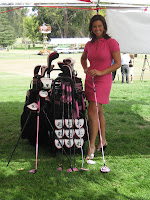 Last fall I read a story about Highway 18 host Keri Murphy becoming the spokesperson for Sweet Spot Golf’s “Think Pink” line of clubs. I asked her about it in our final interview and she seemed very impressed by them.

Keri said they were a great combination of fashion and function – lots of bling bling too :). She also said that Sweet Spot Golf donates money from the sale of these clubs to the Breast Cancer Foundation. I thought that was really cool. So after the interview, I thought to myself that I should give them a try.

Well, I got my wish a couple of weeks ago and was able play with the “Think Pink” driver, 4 hybrid and putter while I was in San Diego on vacation.

I started on the range to get a feel for the clubs; I wanted to evaluate the driver and hybrid against what I play today. In my bag, I have a men’s Taylormade R7 SuperQuad 11 degree driver with a graphite shaft. It’s quite a bit heavier than the Sweet Spot driver and I was wondering if a lighter 13 degree club would suit my swing.

So I started with my R7 and hit some balls for a while to loosen up and then switched to the Sweet Spot Think Pink driver. The first thing that came to mind after hitting it was, “This must be what it’s like training with one of those Momentus Power hitters.” I found that after hitting with my heavy R7, I was able to hit the lighter SS driver farther. That really surprised me. I wasn’t expecting that from a higher lofted club. Nice!

The hybrid was also a pleasant suprise. It is much different than my Callaway hybrids – bigger head that is designed for more of a descending blow like an iron. My Callaway hybrids actually work better with more of a sweeping action. Interesting…. I’ve always wondered about the right way to hit a hybrid because I’ve been given conflicting information. Now I think it depends on the hybrid – no two are created equal. Anyway, I found myself hitting the 4 Think Pink hybrid farther than my 3 hybrid. Hmmm…wonder what that says? Maybe I should get a new 3 hybrid too 😉

The “Think Pink” clubs are definitely head-turners, especially the driver with its massive head and pink/black triangle design on the top. When I pulled it out on the 1st hole of Steele Canyon Golf Course, one of the gentlemen on the tee with us said, “Wow! That’s some club!” He wanted to take a closer look, which I was happy to oblige. I thought the pink might turn him off, but he actually really like it – he said it reminded him of a Tiger with its stripes. He said it looked like “a mean club” – a funny thing to say about pink, but it does have a pretty formidable look to it. 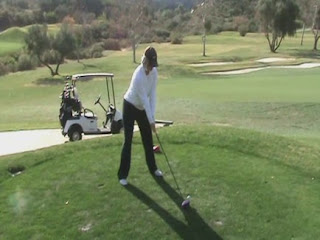 Anyway, I started to get a bit nervous walking up to the tee with this gentleman and his friend watching (they bombed their tee shots off the back tees). All I kept thinking was, “Focus on your pre-shot routine – don’t do anything stupid.” (Okay, I admit it – sometimes I still feel naked on the first tee). Anyway, I’m happy to report that I hit the ball straight down the middle of the fairway and had only a mid iron to the hole. At that moment, my Sweet Spot Driver was christened, “Tigress!”

I wasn’t in a position to play my 4 hybrid as much as I would have liked because I was using my driver and irons most of the time, but the few times I did get to use it, I liked it – especially out of the rough. The club went through the grass like it had been sharpened and popped the ball out nicely.

The putter had a nice feel to it – well balanced and heavy, the way I like my putters. I particularly liked the way it helped me line up my putts with its arrow pattern. I also appreciated the ease in which I could hit my ball when it was up against the fringe. To me a putter is the most personal club in the bag and it needs to instill confidence when you pick it up. I felt confident with this putter and I think it is definitely a club you should consider adding to your putter collection (You can never have just one ;)).

I’m back home now and woke up “feeling in the pink”. It was over 40 degrees outside today in Vancouver (balmy 😉 and so I headed out to the range to try out Tigress and her little sister for a while. I seem to be getting better with these clubs. I can’t wait to try them out again on my favorite Vancouver course soon. I hear it’s only going to snow in the higher elevations this week. No problem – I’ll just play a little closer to sea level. 🙂