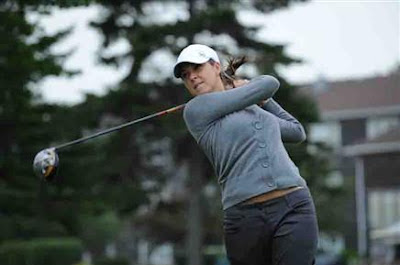 Oh my goodness! What was going on between Brenda and Nicole tonight? We’ve been through 4 episodes already and everything was hunky dorey between everyone (so it would seem). And then suddenly… POW – Cat fight city! Brenda and Nicole go at each other like two felines in heat.

Hats off, Golf Channel! You really had us going there for a while. Haha! I got an email from Michael Michaelides just before the show began saying, “Can’t wait for the drama!” Me too Michael — Me too!

Now don’t forget, Michael was/is friends with Mr. BB X Drama King, David Mobley, so it was no surprise to me to learn that Michael was as interested in the pending drama as I was.

But…tell me, was it a bit anticlimatic to you? The two ladies were certainly “at each other” in their interviews, no doubt about it, but it was over in 10 minutes! I felt like I was watching Aurele “Al” Couture knocking out Ralph Walton in 1946. (Okay, yes I looked up this reference up – I’m not THAT old! ;))

Anyway, here’s what Michael had to say about tonight’s show…

Brenda was travelling Monday night, but caught the show late so we were able to chat this AM. I think it’s obvious what/who we talked about…

Well, Derek watch the whole show for the first time in 5 episodes (he hates watching himself on TV). Besides asking about his great hole-out, I wanted to know what his take was on the Nicole/Brenda battle. Was it started by Brenda teasing them about a fling?

Seems to be a bit of a discrepancy on which hole they played, so I checked. Derek was correct – it was the 10th hole used for the par 5 challenge. 491 yards from the back tees, 461 from the whites. If Brenda’s calcuation is correct and the women played 86% of the distance, then Gerina’s tee position was 86% of 491 – making it 422 plus change.

Brian joined me this AM to talk about his exhausting day. He also wanted to share with the audience a personal message, which is worth hearing.

I wanted to talk to Blair today about her immunity challenge with Eugene and how rattled she was. It was interesting to hear what she thought of Charlie’s comments…

It was great chatting with Gerina about her 290 yard drive – I like to live vicariously through long ball strikers. 🙂

I caught up with Nicole later on Tuesday night. She had a lot she wanted to share about her experience on Big Break PEI and what lead to the rather uncharacteristic behavior/comments we saw from her last night. She also had a number of people to whom she wanted to send a personal message…

Well, I think I have a better understanding now of what Nicole was feeling that night.

Good luck Nicole! Open invitation to you and any of the other Big Breakers who have left the show, but still want to share their thoughts on future episodes here.

Next week…the great wall! Who will flop their shots? Can’t wait to watch and find out!