In the past 7 years I can’t count the number of times I’ve been asked to promote a golf product, book, course or service.  On average I bet I get 3 or 4 requests a day.

My stock answer every time is this:

“I only promote golf products I have used and like. I’d be very pleased to review your product if you want to send it to me; and if I like it, I will write about it.  If I don’t like it, I’ll let you know why, but I’ll never write about it.”

I am of the belief that if you have nothing good to say, then say nothing.

Sadly I haven’t found a lot of golf products to write about because most of products I’ve received have not pass muster or had nothing special about them worth recommending.

Here’s one of the exceptions…Striker Golf GPS.

When I first heard about this new golf iPhone/Android GPS app from Heidi Striker on Facebook, I thought the company was a little late to the app game and wondered if they really had a chance competing with the well-established incumbents. 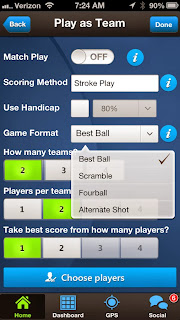 But when I took a look at what they had built and where they are taking the app in the tournament market, I came to the conclusion that Striker Golf GPS has some pretty interesting differentiators and decided I wanted to help her get this app out in front of avid golfers like me:

I decided to test it out while riding shotgun and caddying for my golfguy in Maui.  I couldn’t play that day due to some recent surgery, so I decided to really put the app through its paces on a course we don’t play very often – the Wailea Old Blue.

The first thing  I noticed was that the Striker GPS was fast and as accurate as the GPS on the golf cart – always a good sign.  I liked being able to zoom in anywhere on the course and find distances from our position to the green or any hazard on the course.

But what I really loved was being able to pick a point anywhere on the course and get a distance from our position to that spot and then the distance from that spot to the hole.

What a great course management feature! It really helped me recommend club selections for my golfguy based on his preferred approach shot length on par 5’s or when he was “communing with Mother Nature” in the trees ;).

Being able to enter all his shots into the app without leaving the GPS screen was a real time saver and included # of strokes, putts, chips, hazards, sand and drives.

…and where the drives landed so I could track fairways hit.

When the game was over, we were able to see all the stats I had collected throughout the round and able to save all the data in the app with the score card. It also manages your handicap for you.

I’ve only tried it with one round, but already there is a lot I like about this new app and plan on using it a lot in 2014.

There is a special deal on for the holidays — only $4.99 in both the Apple and Google App stores until 2014.

Starting January the regular price kicks in again at $24.99 (which is still a great deal when I compare it to my Sky Caddie, for which I pay $65 a year just to access the courses they support (on top of the $500 I paid for the device)).

And for those times when “line of site” isn’t an option (which is often since our balls love “the woods” :)), it blows my Bushnell Rangefinder away (which never work well anyway even after sending it back to them for a two-month repair job).

So if you are looking for something to help you with course management, club selection and feedback on where you should be spending more time practicing, give Striker Golf GPS a try.

You can play 2 rounds for free, before being prompted to buy it. But if you’re like me, you’ll be hooked after just one.

When it comes to golf, I love a good laugh.  Because if I didn’t laugh, …