Hello everyone.
I’ve been in communication with the HSBC folks about the upcoming Women’s Match Play championships (and Julieta’s blog) and they sent me this Press Release about a new study on the effects of sports on successful childhood development. The survey was conducted online among men and women in the United States during May and June 2007 among a sample of 600 adults (aged 18+) which was nationally representative of the U.S. adult population. I thought the results were pretty interesting and so in case you missed it, here it is:
US Executive Women Say Golf Teaches Skills Necessary for Business Success: Self Confidence, Decision Making, and Perseverance
New York – Playing golf teaches children key values that are necessary for business success, say U.S. executive women, according to a new survey released today by HSBC. The survey, “Successful Youth Development: The Contribution of Sport,” explored the link between the values adults believe children need to develop in life and ways sports can best teach those values.
The game of golf is strongly associated with teaching the three key values of self confidence (45 percent), decision making (41 percent), and perseverance (41 percent), according to respondents. Executive women in particular believe that decision making skills are critical to good child development and golf was considered to be among the most effective sports for teaching this key business value. Indeed, some 70 percent of the executive women surveyed believe the values learned through sport can be useful in business, according to the survey which was conducted for HSBC by the Henley Centre HeadlightVision.
Key survey findings include:
• The vast majority (80 percent) of U.S. executive women said that participating in sports builds a child’s self confidence – a skill invaluable in business.
• More than three-quarters of executive women (76 percent) feel that decision making, an integral part of both the game of golf and business, is an important skill for a child to learn.
• Sports were also seen to play a formative role for children, with two-thirds (66 percent) saying they believe the values learned through sports can be useful in business.
• Some two thirds (66 percent) of executive women said they believe top sports people can inspire young people to achieve.

“This survey highlights what HSBC has established as a core part of its mission,” said Giles Morgan, Head of Sport S 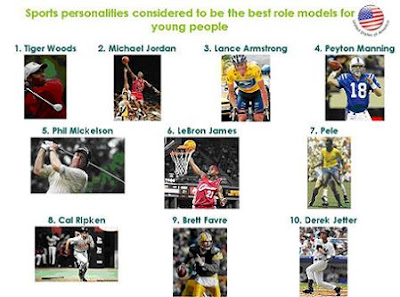 ponsorship & Marketing, HSBC. “We believe that sports can make a difference in all our lives and we are committed to unlocking the game of golf at all levels. By finding new ways to promote positive values through sports, HSBC can help support local communities.” “Golf is a game that puts men and women on an equal footing,” Morgan continued. “With this equality on the green, young girls can gain a level of self-confidence throughout their life that will help them better compete against men, on an equal footing, in the workplace.” Top male and female athletes identified: The survey also identified the top five male and female athletes considered to be the best role models for young people, according to the survey the top male role models are: golfer Tiger Woods, basketball player Michael Jordan, cyclist Lance Armstrong, football player Peyton Manning and golfer Phil Mickelson.
The top female role models are Olympian Mia Hamm, softball player Jennie Finch, ice skater Michelle Kwan, swimmer Kaitlin Sandeno and tennis player Maria Sharapova.
The survey findings are also echoed in the real-life experiences of top athletes. Indeed, the top sports role model in the survey, Tiger Woods, said that, “I am flattered and gratified to receive this recognition from the survey, which is also a tribute to the great game of golf. I have seen in my own lifetime how sports – and a strong dedication to improving one’s own game – can positively impact one’s life in ways you can’t imagine when you are young. And that’s what the work of the Tiger Woods Foundation is all about. Through personal enrichment programs, scholarships, and direct grants, the Foundation is helping millions of children realize their dreams.” “HSBC is proud to be a sponsor of the Tiger Woods Foundation, which has done so much to empower young people to dream big and set specific goals to achieve their dreams,” said Morgan. “The Values in Sports that we surveyed are exactly the same values we see the Foundation foster – and Tiger personally exemplify – every day in the real world.”
Top female golfer Annika Sorenstam noted that golf enabled her to find success beyond the fairway and the putting green. “The lessons of sports can have especially important impacts on young girls and women, translating into confidence in the workplace and greater success in business,” said Sorenstam, who will be among the golfers at HSBC’s Women’s World Match Play tournament, taking place at the Wykagyl Country Club in New Rochelle, N.Y., July 19 through 22. The tournament will showcase the top talent in women’s golf – including HSBC WWMP defending champion Brittany Lincicome — competing for a total purse of $2,000,000.
Additionally, HSBC’s support of organizations such as First Tee, which is committed to teaching young people good life skills through the game of golf, highlights how HSBC uses its wide ranging community presence to improve the lives of its neighbors and help create an environment that is both good for society and for business.
“The golf course has traditionally been the bastion and the preserve of businessmen. But this has changed dramatically in recent years with the success of world champions like Sorenstam and the new crop of LPGA leaders,” said Diane D’Erasmo, Executive Vice President, Commercial Banking, HSBC Bank USA, N.A. “It’s clear from the survey that executive women see a strong correlation between the skills needed for success on the ball field and those needed in the board room.”
More than two-thirds of those surveyed (68 percent) said companies should be more involved with supporting sports at local levels. According to HSBC’s Morgan, this is why it’s important to support both professional level tournaments, such as the Women’s World Match Play, as well as local organizations such as First Tee.
“At every level, the impact on society is apparent,” Morgan said. “At HSBC, our responsibility goes well beyond banking. We have an obligation to support a number of different activities, including sports, among young people and to promote great role models such as Annika and Brittany. In this way we fulfill our duty not only to build success in business but also help to build a successful society.”
Pamper yourself on Maui! Book your little piece of heaven in golfers’ paradise. Book now at http://www.vrbo.com/424659 and tell them Golfgal sent you!