Did anyone watch the press conference after the first or second round where Phil said he was chuckling throughout the round watching Tiger? It was because Butch had shared with Phil some “inside information” on Tiger’s game – mannerisms…behavior…we don’t really know (Phil kept that to himself), but he did indicate then that it helped him understand Tiger and that it helped him to play against him.

Hmmm….I don’t know about you, but I find Butch’s behavior a little bit “off” – not entirely unethical, but I’m not impressed with it.

I realize he wants to give Phil every advantage, but golf is a business and in business, consultants and personal coaches sign non-disclosure agreements to keep inside information safe and secure for their clients. I think the same should happen in golf. Golfers and their coaches share intimate strategic information that should be kept confidential. If Hank hasn’t signed an NDA with Tiger yet, I bet he will before this week is over.

Well done Phil…but don’t get too cocky…one win does not a Fedex champion make! 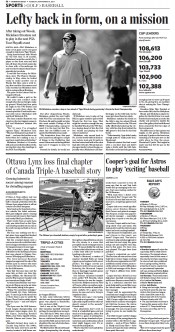 Lefty back in form, on a mission

NORTON, MASS.— Phil Mickelson is back on his game and it was good enough to take down Tiger Woods. Going head-to-head with Woods for the first time in 18 months, Mickelson buried the world’s No. 1 player on the front nine and held him off down the… read more…