Tough to pick a winner this weekend

What a great Sunday close for the Mercedes-Benz Championship in Kapalua Plantation! I was glued to the set as you just didn’t know what was going to happen. Having all these great players in contention made for really exciting golf and the thing I loved about it was that I didn’t care who won. I liked them all.

It was sad to see Weir struggle off the first tee and not get it back, but 4th isn’t exactly a crash. And Ames recovered nicely from the day before with a 66, but it just wasn’t quite good enough. But hey…3rd is nothing to sneeze at either. I can’t imagine how the Edmonton Journal can write such a headline (see below).

We had dinner guests last night and it was very hard to turn the TV off when Chopra and Stricker were in a playoff – so we didn’t. Thankfully our friends didn’t mind eating while we watched the exciting finale. They called it a great TV Dinner Party.

I couldn’t decide if I wanted Chopra to win or Stricker. Both are such nice guys and good players. But unfortunately there can only be one winner and I think Chopra’s putting this weekend was so amazing, he really did deserve to win. 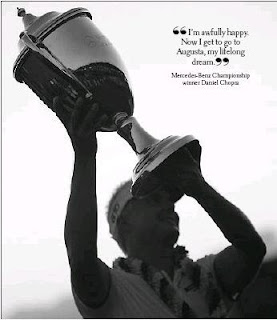 As for the dress code this weekend – Jonathan Byrd should get a fashion consultant – dark blue wide striped shirt with mint green trousers???

I don’t think so…sure, if you saw a close up, you saw the little mint green logo stitching on the shirt, but he needs to learn to dress for the long TV shots, not his caddy next to him. And then in the final round, his white pants were see-through – yikes…(and I don’t think it was just my new HD TV).

Anyway, I was worried that this weekend would feel like part of silly season with Tiger, Phil, Adam etc not on the field, but in the end, Sunday’s exciting round really topped off the opener nicely.