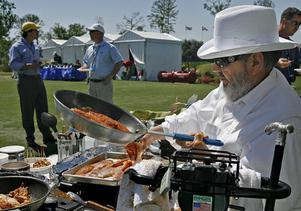 I don’t think Celebrity Chef Paul Prudhomme woke up Tuesday morning thinking he better put on his Kevlar vest to dodge golf balls at the Zurich Classic, but it might have been a good idea in hindsight.

Prudhomme was setting up his cooking tent on the practice range at the Zurich Classic in New Orleans this week when he felt a sting in his right arm. Ouch…darn bees! Where’s the vinegar?

As most of us do when stung by a bee we swear and then shake our arm. What we don’t expect to see is a .22 caliber bullet fall out of our sleeve.

Deputies believe the famous chef was hit by a falling bullet, probably fired from within a 11/ mile radius of the golf course (probably a range). The good news is that the celebrated chef didn’t require medical attention.

The bad news is that falling bullets are not uncommon and can often cause serious injury or even death. Lucky for Chef Prudhomme, he was only grazed and was able to return to creating delicious concoctions in 5 minutes.

I did a little research and learned that the mortality rate among those struck by falling bullets is about 32%, compared with about 2 – 6% normally associated with gunshot wounds. The higher mortality is related to the higher incidence of head wounds from falling bullets. It sounds like Chef Prudhomme beat the odds on this one.

Apparently, the bullet cut Prudhomme’s skin on his arm above the elbow and put a hole in his white chef’s coat. Those jackets are expensive. Maybe he should auction it off on eBay. I bet he’d get a fortune for it. What, no ‘fore!’? Bullet stings chef
— From Our Press Services
The Commercial Appeal
27 Mar 2008

Chef Paul Prudhomme was setting up his cooking tent on the practice range at the Zurich Classic of New Orleans golf event this week when he felt a sting in his right arm, just above his elbow. Prudhomme shook his shirt sleeve and a .22caliber bullet… read more…

Tech Tags: The Commercial Appeal newspaper Celebs Advice Games
Pamper yourself on Maui! Book your little piece of heaven in golfers’ paradise. Book now at http://www.vrbo.com/424659 and tell them Golfgal sent you!