I feel like a parent with a problem child. You love them to death, but you just can’t put up with them anymore. You try love in all its flavors, including “tough love”, but nothing works. Some people don’t want to be helped and they certainly don’t want to help themselves. Sometimes you just have to walk away… 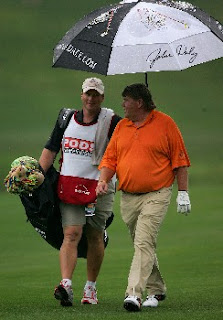 Such is the story of John Daly…

I don’t know what made him fire his caddy on Thursday (does anybody know?), but it certainly didn’t help him make the cut.

And then his behavior afterwards (hanging around the course on Saturday drinking like he was at a frat party), just isn’t what professional golfers should be doing. And it’s not done by anyone, except JD.

Does he want to self-destruct? Sometimes these are cries for help, but so many have tried so hard to help him and he just doesn’t seem to want it. Maybe he just hasn’t sunk low enough…but he’s getting there.

And the one person who just might have been able to turn his game around has now given up as well. As Butch Harmon said in a Golf Channel interview, “When I started working with John the understanding was that I would help him with his golf game if he helped himself. Quite frankly I don’t see any reason for us to continue going down that road. I don’t even want to be associated with him now.”

This is such a sad story. I feel like all his fans all be going to an Al-Anon meeting.

John Daly continues to mine the sports world for firsts. Our previous favorite was when he told of gambling at the $ 5,000 slot machines — who knew those existed? Now comes word that Daly has achieved the rare feat of being kicked off the team in an… read more… Tech Tags: Arkansas Democrat-Gazette Weekday newspaper The second page
Pamper yourself on Maui! Book your little piece of heaven in golfers’ paradise. Book now at http://www.vrbo.com/424659 and tell them Golfgal sent you!